What does Overly Attached Girlfriend mean?

Where does Overly Attached Girlfriend come from? 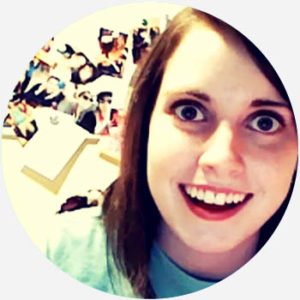 In 2012, Justin Bieber launched a contest to accompany the release of his new fragrance Girlfriend. He challenged fans to rewrite the lyrics to his song “Boyfriend” from the girlfriend’s point of view, then upload a video of them singing the song to YouTube.

Laina Morris, then a 20-year-old from Texas, uploaded a video submission for the contest in which she sang about being a clingy girlfriend and smiled a creepy, wide-eyed smile at the camera. The video was soon uploaded to Reddit, and within a day, had accumulated more than one million views. Reddit user yeahhtoast took a screenshot of Morris smiling and captioned it with a joke: “I sewed my name on your shirts in case you forget you’re taken.” The meme took off, and internet users began replacing the text with their own jokes about having a stalker for a girlfriend (e.g., “Just because you broke up with me doesn’t mean I broke up with you” or “I recorded you breathing at night and made it my ringtone”). The original video of Morris singing now has more than 18 million views.

The OAG meme was most popular in 2012 and 2013, right after the original contest video was uploaded. Users across various social media platforms shared their versions of the meme.

Though in 2013 Morris appeared in late-night comedy sketches and developed a brand relationship with the car company Kia, the meme itself is not as popular today as it once was.

Some Reddit users have criticized the meme as sexist because it perpetuates the stereotype that women are more clingy in relationships than men. As critics point out, a companion meme, the Overly Attached Boyfriend, never gained as much popularity as the OAG because it didn’t play into the same stereotype.