Itachi is a popular and complex anti-villain from the Naruto anime and manga series.

Where does Itachi come from? 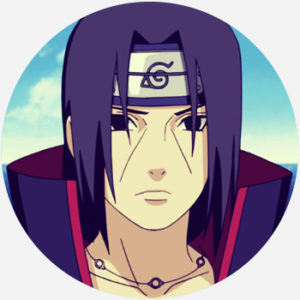 Itachi had black hair, tied into a ponytail with long parted bangs. He wore a headband with a leaf symbol with a horizontal slash over it, signifying his “missing-nin” status, meaning that he had cut ties with his native village, the Hidden Leaf Village. Itachi was also often outfitted in a long black robe with white and red cloud patterns on it, signaling his allegiance to the Akatsuki, a terrorist organization. He rarely showed emotion but was prone to shows of force. Having been traumatized by witnessing a previous war, he was a pacifist and would often run from confrontation. He possessed the powerful Sharingan and was a ninja prodigy in his youth.

Itachi is the brother of one of the main characters of Naruto, Sasuke. For much of the series’s duration, Itachi was reviled by fans for killing his and Sasuke’s entire clan, the Uchiha clan. It’s eventually revealed that Itachi didn’t murder his clan in cold blood. In fact, he was ordered to murder them by the leadership of his village to stop a coup d’etat, meaning that he acted in his village’s and Sasuke’s best interests the whole time. This was done to prevent another world war between the villages, which Itachi was afraid of. After killing his clan, he was allowed to spare his brother Sasuke, hoping that the hatred and trauma from the event would mold him into a strong ninja. Afterwards, he became part of the Akatsuki as a spy, making Itachi more prominent as an antagonist.

In 2009, Itachi died in the anime after a climactic battle with Sasuke, wherein he gives Sasuke his Sharingan power. Having been wracked by guilt, Itachi had always known that the only way he could meet his end was by Sasuke’s hand. In fact, Itachi went so far as to make himself seem dastardly and evil, so that when Sasuke would go on to kill him, Sasuke would be seen as a hero.

In the manga’s annual character popularity poll, Itachi ranked as high as 5th place out of 87 options, only losing out to the main characters and Gaara. As he’s a powerful ninja, he performs well in battle, making some of his fight scenes the best in the series as well. Due to the heinous actions he committed out of love for his brother and village, he is regarded as a very complex character, making him a fan favorite.

My roommate making too much noise tonight I’m finna itachi the whole house
@ALTSON2008, February, 2018
Itachi became a man whom fans were eager to rain hate upon, but that began to change towards the end of Naruto Shippuden.
Megan Peters ComicBook, May, 2017
I wish we could’ve seen Itachi get smacked just once in the anime so people will stop hyping him up like he could take on Hashirama or some shit
@Jinchuuriking, February, 2018
SEE MORE EXAMPLES

The complexity of Itachi’s character inspired much discussion about him, especially in online fandom. As the series progressed, fans often wondered what Itachi’s motives were. For example, in the beginning of the series, fans wondered why Itachi would kill his entire clan. Some wondered why Itachi would even stay in the Akatsuki, as his goals might be misaligned with theirs. His relationship with his brother Sasuke was a driving force of the series, making it a focal point of discussion in the fandom as well. After the revelation of his true motivations behind murdering his clan, Itachi was seen as a more sympathetic character, and their relationship was viewed as tragic.

Speculation is a popular pastime in the Naruto fandom, and anything related to Itachi is no exception. Since Itachi was a very powerful ninja, others wonder how he would fare in fights against others, such as Kakashi, who taught the three main characters how to fight. This speculation can even extend outside of the Naruto universe, with fans speculating if he could defeat Marvel super heroes, for example.

Because Itachi murdered his clan, people occasionally use Itachi as a verb, meaning “to kill everyone around.”

This is not meant to be a formal definition of Itachi like most terms we define on Dictionary.com, but is rather an informal word summary that hopefully touches upon the key aspects of the meaning and usage of Itachi that will help our users expand their word mastery.