Who is Jake from State Farm?

Jake from State Farm is a character in a popular commercial for State Farm Insurance, a customer service employee who, due to no fault of his own, ends up caught in the middle of a spousal misunderstanding.

Where does Jake from State Farm come from? 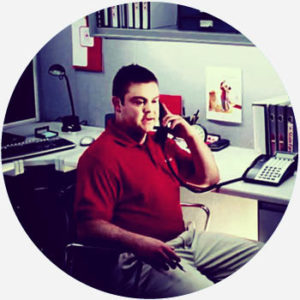 In 2011, State Farm Insurance released a new advertisement promoting the fact that they offer customer service 24/7, even in the middle of the night. In the commercial, called “State of Unrest,” a husband stands in a darkly-lit living room talking to an unseen party on the phone, murmuring “Yeah, I’m married. Does it matter?” At this point his wife sneaks up behind him, demanding to know who he is talking to at 3am in the morning, to which he responds “Jake, from State Farm.” She yanks the phone away from him and begins speaking into it, sarcastically asking the person on the phone “What are you wearing, Jake from State Farm?” At this point, the commercial flashes to Jake, on the other end of the line, sitting in the customer service office. In confusion, he nervously responds, “Uh… khakis?” When it cuts back to the married couple, the wife covers the phone and snips to her husband, “She sounds hideous.”

The commercial was immensely popular across the United States, with some even calling it “the best commercial ever.” The ad continued running for years.

The character of Jake from State Farm spawned his own page on the State Farm website, called Jake’s Place, which expanded into an @JakeStateFarm Twitter account, which had over 40,000 followers by April 2017. Unofficial merchandise was also generated from the Jake at State Farm success, including t-shirts, mousepads, and more. The ad also inspired many memes, which either remade the ad or referenced it in some way.

The popularity of the ad continued growing years after its release, spiking in 2015 when State Farm released a new version. In this one, the picture occasionally scrambles and ends with the hashtag #TuneInEarthlings, teasing a remake of the ad featuring Dan Aykroyd and Jane Curtin as the Coneheads, their famous comic extraterrestrial characters. Though the dialogue in this remake is changed to match the Conehead family’s distinctive speech pattern, the ad otherwise plays out in the same way, complete with Jake’s line about khakis.

As interviews later revealed, Jake is actually Jake Stone of Normal, Illinois, an actual employee of State Farm who answered a casting call from within the company. Ironically, he left his job at State Farm only a short time after the commercial launched, and was surprised to suddenly become a celebrity, often being stopped for photos, and asked to repeat his famed “Uh… khakis?” line. The khakis featured in the ad now hang on the wall at a bar, Pub II, where Stone went to work after State Farm.

In 2015, a hoax circulated that the real Jake from State Farm had been found dead in his apartment, purportedly murdered by his wife after she caught him with another woman.

Examples of Jake from State Farm

“Just got asked if i was jake from state farm at chick fila cause i have khakis on”
@jacob_goodman Twitter (April 13, 2017)
“Ghosts are regular funny people. True dialog: 'Who's this,' I ask the spirit near the fridge. 'It's Jake, from State Farm.'”
@Hauntedi Twitter (April 16, 2017)
“Forget Miley Cyrus, Nicki Minaj, or Kylie Jenner: the pop culture icon that you need to be this Halloween is none other than Jake from State Farm.”
Kaitlin Reilly, “Cheap Jake From State Farm Halloween Costume Ideas That'll Help You Honor The Epic Commercial,” Bustle (October 16, 2015)
SEE MORE EXAMPLES

Who uses Jake from State Farm?

Due to the popularity of the “State of Unrest” advertisement, Jake from State Farm has become a notable meme and widely recognized phrase.

Memes referencing Jake from State Farm usually depict the character in a variety of compromising situations that result of from misunderstandings. For example, one meme shows Liam Neeson’s character from Taken threatening to kill Jake, while another shows Gene Wilder as Willy Wonka smirking away the question: “You are on the phone with Jake from State Farm, right?” Other memes show other characters who are not Jake using the famous line to mask themselves, such as the slasher icon Michael Myers.

Sometimes, if a person complains about phone calls they are receiving, particularly lewd ones, someone else might jokingly apologize that they thought they were talking to Jake from State Farm.

Jake from State Farm’s khakis also inspired the hashtag #DemKhakis, used humorously to fawn over the sexiness of normal, plain style of trousers.