Who is Lord Farquaad?

Lord Farquaad is the villain of the animated film Shrek, known for his straight-banged haircut, diminutive stature, and imperious personality.

Where does Lord Farquaad come from? 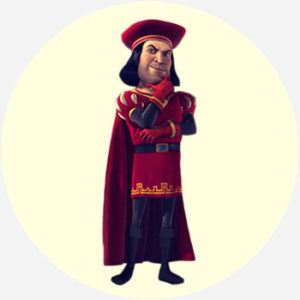 Lord Farquaad first appears in the 2001 animated fantasy film Shrek as the dictatorial ruler of Duloc, which he attempts to rid of fairy-tale creatures. This sets the film’s central plot in motion. He is a short man with a medieval pageboy haircut and an arrogant, temperamental, and cold demeanor.

Some have speculated that Lord Farquaad’s distinctive appearance and personality are partly based on former Disney CEO Michael Eisner, with whom his once-coworker Jeffrey Katzenberg, who produced Shrek for DreamWorks, had a bitter falling-out. DreamWorks has stated, though, that Lord Farquaad’s look was based on John Lithgow, who voiced the character.

Lord Farquaad’s name has also been subject of speculation. Some have noticed that Farquaad sounds like the vulgar slang fuckwad. While some have supposed this name is another dig at Eisner, others think it’s a joke about Farquaad’s character aimed at parents watching the film with their children.

The character has obtained a fandom, if somewhat ironic, thanks to his distinctive name and character. Puns on his name (e.g., “the FarQuaadratic Formula”), and merchandise with his image are common. Lord Farquaad is sometimes used as a sneering reference to people of short height, with “bowl cut” haircuts, or considered pompous or domineering—including President Donald Trump, who has drawn mocking comparisons to Lord Farquaad due to what commentators saw as similarities in their personalities and policies, including misogyny and xenophobia.

This is not meant to be a formal definition of Lord Farquaad like most terms we define on Dictionary.com, but is rather an informal word summary that hopefully touches upon the key aspects of the meaning and usage of Lord Farquaad that will help our users expand their word mastery.