Who is Luna Lovegood?

Luna Lovegood is a character from the Harry Potter bookand film series. In the films she is portrayed by Evanna Lynch.

Where does Luna Lovegood come from? 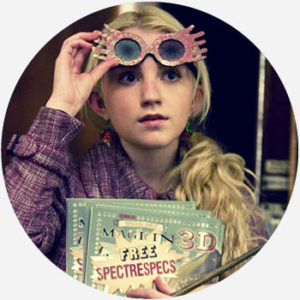 Luna Lovegood first appears in the fifth Harry Potter book The Order of the Phoenix. She is known for her eccentric manner of dressing and her absentminded, unconventional behavior. She also believes in things that the other characters in the book regard as unconventional, perhaps because of her father, who writes the fringe magazine The Quibbler. Additionally Luna Lovegood is known for reacting with a lack of surprise to unusual events, thanks to these beliefs.

“She isn’t even fazed! This girl is straight Luna Lovegooding right now.”
Nick Dorman Couchface (January 16, 2015)
“harry styles is just luna lovegooding his way through life.”
eloise @eloiserummaging Twitter
“Folly (another ironically apt name) is an apprentice Etherialist—part psychic, part psychotic (think Luna Lovegood on a really bad day)—who is recruited to join the other two (along with other members of the Guard and the Navy) in a mission to defend the Spire.”
David Kudler, “Review: The Aeronaut’s Windlass—Exciting Steampunk Mashup,” The Huffington Post March 5, 2017
SEE MORE EXAMPLES

Luna Lovegood’s name is sometimes used as a verb among fans of the Harry Potter series. Luna Lovegooding can mean to behave in an absentminded way or to be eccentric. Often it refers to a combination of both that encompasses the character’s mix of confidence, dreamy demeanor, and unconventional belief system.

Luna Lovegood is a relatively popular character within the franchise. She’s a protagonist and is portrayed in a sympathetic way. Although she’s given the nickname Loony Lovegood, other protagonists in the book defend her. As such, when her name is invoked as a nickname or verb, it’s generally in a positive-to-neutral light, rather than a negative one.

One popular, and oft-referenced, quote from Luna Lovegood is “Don’t worry, you’re just as sane as I am.” She says this to Harry Potter in the book the Order of the Phoenix, and this quote has been used on fan pages, merchandise, and blog articles.

Another concept frequently referenced alongside Luna Lovegood are Nargles and Crumple-Horned Snorkacks. These are two creatures that, in the series, only she believes exist. Since they’re associated with her, fans often reference them.

This is not meant to be a formal definition of Luna Lovegood like most terms we define on Dictionary.com, but is rather an informal word summary that hopefully touches upon the key aspects of the meaning and usage of Luna Lovegood that will help our users expand their word mastery.