Who is Nigel Thornberry?

Nigel Thornberry is a character on the TV show The Wild Thornberrys whose funny vocal noises and exaggerated facial features are employed in popular memes. The character name is also occasionally used as a slang term for “getting drunk.”

Where does Nigel Thornberry come from? 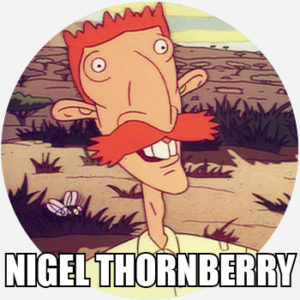 The Wild Thornberrys first aired on Nickelodeon on September 1, 1998, and during its run it was also accompanied by two movies, including a crossover with The Rugrats. The series focused on Nigel’s family, specifically his daughter Eliza, who could talk to animals. A caricature of British naturalists and explorers like David Attenborough, Nigel played a sizeable role in the show, as the family was traveling around the world to film his nature show, Nigel Thornberry’s Animal World. The character was voiced by actor Tim Curry.

The show had been fairly well-received, but eventually faded out of public consciousness for the most part once the TV series ended in 2004. Things were relatively quiet for a while, though Nigel did make appearances in video mashups known as YouTube Poops. This relative inactivity lasted until Nickelodeon began to air reruns of 1990s TV shows in 2011, perhaps making internet-goers nostalgic. Also in 2011, a Tumblr user named peniscrabs posted a remix of the Katy Perry song “Firework” that featured sound clips of Nigel making a strange sound throughout the song, sometimes over an extended period. The popularity of this remix prompted other users to create their own, which also repurposed popular songs in a similar way. It seemed that after the creation of these remixes, people fell in love with Nigel all over again.

He became popular in 2012, when a new craze started. Apparently starting with tumblr user miryuuchan, people began swapping the faces of Disney characters with Nigel’s face on GIFs. Since then, Nigel has solidified his presence in meme culture.

In two hours I'll be stood waiting to get into the beer festival. In three, I'll be on my way to being absolutely Nigel Thornberried!
@xGraveless, January, 2015
We just watched this documentary in class and one of the guys sounded just like Nigel Thornberry HOLY
@ShayRayVal, January, 2018
A friend asked me to print a Nigel Thornberry halloween mask for him and I can't for the life of me find one. The characters memes are still circulating the internet regularly, so it is a wonder no one has made one yet!
GamerGorman, MakerBot’s Thingverse, September, 2016
SEE MORE EXAMPLES

The typical Nigel Thornberry remix meme is created with two ingredients: a sound clip from The Wild Thornberrys and a pop song. The sound clip is invariably from a scene in the show where Nigel is at a podium at an awards show. Instead of talking, he makes a prolonged, garbled sound, most closely approximated to “blargh.” This sound is then added into a pop song of choice, such as Britney Spear’s “Toxic” or Lady Gaga’s “Bad Romance.” The sound usually replaces important or emotionally significant lyrics for maximum absurdity, happening several times throughout the song. For example, in Lady Gaga’s “Bad Romance,” Nigel replaces the phrases “caught in a bad romance,” and “bad romance.”

Nigel’s facial features, with his massive nose and small eyes, make him a prime candidate for visual memes, especially those having to do with photo-manipulated GIFs. While he appears on some GIFs from the start of their loops, he also shows up in others in surprising ways. In these, another character’s face is replaced by his when it’s least expected. The result is Nigel’s face juxtaposed on the bodies of carefully-designed, otherwise aesthetically-pleasing characters, which has a humorous effect, especially in the case of Disney princesses.

Though he’s mainly used in visual or audio memes, people sometimes also get Nigel Thornberried. As Nigel’s catchphrase is “Smashing,” his name can occasionally be used to express getting drunk, likely since it’s close to smashed. Alternatively, it may be because the sound he’s famous for is a close imitation of how someone who is very smashed would sound. For example, people might say that they’re looking forward to getting “absolutely Nigel Thornberried,” meaning that they want to get incredibly intoxicated, possibly to the point where nobody can understand them.

This is not meant to be a formal definition of Nigel Thornberry like most terms we define on Dictionary.com, but is rather an informal word summary that hopefully touches upon the key aspects of the meaning and usage of Nigel Thornberry that will help our users expand their word mastery.