Who is Pootie Tang?

Pootie Tang is both the title of a movie and the name of the main character in that movie.

Where does Pootie Tang come from? 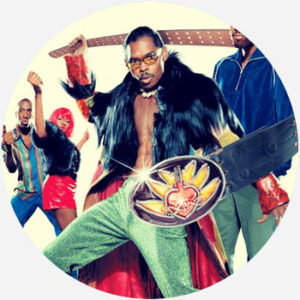 Pootie Tang is a 2001 comedy film written and directed by Louis C.K. The titular character, Pootie Tang, is a parody of characters that appear in blaxploitation films popular in the 1970s. These films feature black characters, and capitalize on current trends, niches, or controversies in order to attract viewership and become financially successful.

Pootie Tang’s language is peppered with slang words that the viewer couldn’t possibly know. The other characters understand him almost perfectly, though that doesn’t stop miscommunications from occurring. According to Louis C.K., the confusion is very intentional. He says that he wanted to create a character so cool that he just exudes this coolness, even though his speech isn’t comprehensible by the audience. The film was met with poor critical reception, though later became a cult hit. When people reference this film, they usually throw in a bit of the character’s language.

“never forget that Louis C.K. wrote and directed Pootie Tang”
docislegend Tumblr (December 7, 2016)
“i think i don't talk much bcuz i watched too much Pootie Tang when i was younger & knew i only need to speak when it's really needed”
Sewer Side Rascal @SuicideRascal Twitter (May 1, 2017)
“Pootie Tang, so cool he makes Shaft look like Gary Coleman. Pootie Tang, role model for the kids, sex symbol to the ladies, crime-fighting superstud to everybody else. Pootie Tang, unencumbered by an intelligible language.”
Robert Leaver, “Pootie Tang Speaks A Language All His Own,” Esquire (January 29, 2007)
SEE MORE EXAMPLES

Pootie Tang as a term is typically used when people reference the movie or discuss its title character. Maybe they’re discussing scenes from the movie or expressing disappointment that people haven’t seen what they consider a classic.

Whenever it’s mentioned, people often like to quote one of the character’s nonsense phrases. These range from sepatown (a word that could mean anything from bullshit to telling someone to calm down) to capachow (“no problem”). These are only speculative meanings, as the character uses them in many contexts and they’re never explained. Sometimes people mention the character’s name when they encounter nonsensical, clearly fabricated slang.

This is not meant to be a formal definition of Pootie Tang like most terms we define on Dictionary.com, but is rather an informal word summary that hopefully touches upon the key aspects of the meaning and usage of Pootie Tang that will help our users expand their word mastery.