What does Slytherin mean?

Slytherin is one of the four houses of Hogwarts School of Witchcraft and Wizardry in J.K. Rowling’s Harry Potter series. Each house has a set of traits and characteristics associated with it, and those in Slytherin are known for being ambitious, cunning, and resourceful. Slytherins are also sometimes regarded as being evil thanks to the fact that many of the most sinister witches and wizards have been associated with this house.

Where does Slytherin come from? 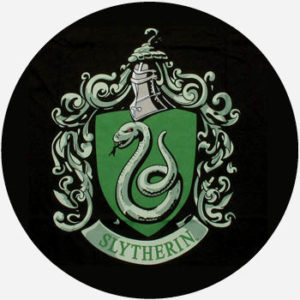 Slytherin is first introduced in the book Harry Potter and the Philosopher’s Stone. The school where the book is set, the Hogwarts School of Witchcraft and Wizardry, is divided into houses, much like many real-life British public boarding schools. These houses are called Slytherin, Ravenclaw, Hufflepuff, and Gryffindor.

Each house has its own particular personality, and each student gets put into a house by a magical hat called the Sorting Hat. The traits that get you placed into Slytherin are ambition, resourcefulness, determination, and cleverness. An association with villainous characters and elitism has given Slytherin the reputation of being an evil house.

Hogwarts houses, however, no longer signify just a fictional construct in a beloved series. In the real world, sorting people into a given house has become a common way of signifying something about their personalities. Fans put themselves, public figures, and characters from other fictional worlds into Hogwarts houses. They’re sometimes aided by personality quizzes that can help you figure out which house truly represents your inner self.

“Slytherining my way out of this Gov reading check...”
grace b @gracebwynne Twitter (January 18, 2016)
“Angela never shuts up about her relationship with 'the (state) senator' which is such a Slytherin thing to do to brag about your connections (just like Slughorn).”
Madison Owens, “If The Office Characters Went To Hogwarts,” The Odyssey Online (July 14, 2015)
“I don't bring it up a lot, because I remember all too well the junior high days when saying 'I'm a Slytherin' was basically the equivalent of tattooing the words 'social deviant' onto your forehead.”
Emma Lord, “In Defense Of Modern Slytherins, The House That Is Getting A Bit Tired Of Your Sass,” Bustle (Janary 25, 2016)
SEE MORE EXAMPLES

A Slytherin can refer to someone in the Harry Potter books who belongs to that house. However, it can also be someone outside the books who has the traits of a Slytherin or identifies as belonging to the house.

Slytherins have a poor reputation both inside and outside of the books. The main villain of the series, Lord Voldemort, is a Slytherin, and so is antagonist Draco Malfoy. The founder of the house was also known for elitism, a reputation which has been transmitted to the house itself. Taken together, this gives Slytherins a bad name in the eyes of some fans.

Despite this reputation, many people who align themselves with Slytherin take great pride in their house. Hogwarts houses can be an important piece of a Harry Potter fan’s identity, and there’s a Slytherin Pride day to celebrate their house. There are also plenty of articles about why Slytherins are misunderstood and not as bad as people think.

The Slytherin reputation for cunning has led to the creation of a verb to commemorate it. Slytherining means to behave in a cunning fashion, particularly to develop a clever plan.

This is not meant to be a formal definition of Slytherin like most terms we define on Dictionary.com, but is rather an informal word summary that hopefully touches upon the key aspects of the meaning and usage of Slytherin that will help our users expand their word mastery.