Who is Slender Man?

Slender Man is a fictional creepypasta character depicted as an unnaturally tall, thin, spectral man with a featureless white face and a black suit and tie, sometimes shown with long black tentacles and sometimes without. The history and mythology of the Slender Man character has branched off in various directions since its internet conception. Usually mysteriously vague, Slender Man stories may involve the stalking, kidnapping, brainwashing, or murder of children.

Where does Slender Man come from? 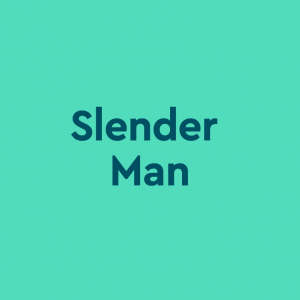 The Slender Man (commonly referred to simply as Slender Man, also sometimes spelled Slenderman) was created in 2009 by Eric Knudsen (username Victor Surge), a user on the Something Awful internet forums. Knudsen created the character for an online Photoshop contest that called for participants to digitally transform ordinary photographs and pass them off as authentic to a number of paranormal interest forums. For the contest, Knudsen entered two black-and-white photographs of groups of children on playgrounds with Slender Man in the background.

Although most of the contest entries simply included images, Knudsen added captions to his photos (below), effectively creating a story for the images with the fictitious quotes which helped launch the creepypasta genre. 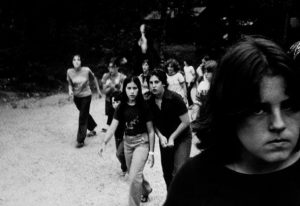 The first caption read: “‘We didn’t want to go, we didn’t want to kill them, but its persistent silence and outstretched arms horrified and comforted us at the same time …’ 1983, photographer unknown, presumed dead.” 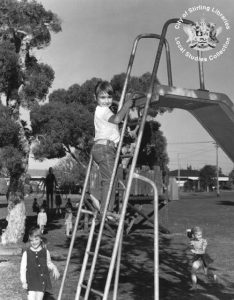 The second photograph was captioned with even more historic and local details, making the almost-ordinary photos much more convincing to outside readers: “One of two recovered photographs from the Stirling City Library blaze. Notable for being taken the day which fourteen children vanished and for what is referred to as ‘The Slender Man.’ Deformities cited as film defects by officials. Fire at library occurred one week later. Actual photograph confiscated as evidence. 1986, photographer: Mary Thomas, missing since June 13th, 1986.”

Knudsen has spoken on the surprising spread of Slender Man after the contest, calling it “an accelerated version of an urban legend” and stating that he never expected awareness of the character to reach beyond its original forum.

The viral sensation of Slender Man was largely responsible for launching the creepypasta genre of internet literature, and the nature of his fluid mythology set the precedent for future famous creepypastas. Much of Slender Man’s success lies within the character’s malleability, which is perfectly suited for the storytelling medium of internet forums where anonymous users can add on to existing stories and widen audience perspectives of the same subject, continually muddying its image.

Slender Man has been critically examined by scholars as the subject of modern folklore, as in Shira Chess’s and Eric Newsom’s book Folklore, Horror Stories, and The Slender Man: The Development of an Internet Mythology, in which they connect Slender Man to traditional folklore in terms of the collectivity, variability, and performance behind its creation.

The mythos of Slender Man has now expanded with the contributions of countless internet users and become a part of contemporary pop culture. The internet myth came to much more widespread public attention in 2014 with what is now known as the “Slender Man stabbings,” describing an incident in which two 12-year-old girls lured a classmate into the woods and stabbed her 19 times, supposedly to impress Slender Man, and protect their own families from him. Since then, a number of other incidents involving children committing acts of violence in Slender Man’s name have been reported.

The “Slender Man stabbing” inspired the 2016 HBO documentary Beware the Slenderman, and a number of references to Slender Man have been made throughout pop culture since its creation.

Some users even begin to suggest that Slender Man existed far before Knudsen claimed to have made him up and insist that this story dates back to German folklore.
Bryn Lovett, Rolling Stone, August 3, 2016
Because Slender Man was developed collaboratively, by a community of anonymous contributors, that mythos is spotty and varied—much like a more organic urban legend would be.
Caitlin Dewey, The Washington Post, July 27, 2016
Do you think we'll ever get another genuinely cool creepypasta like slenderman again without it becoming a meme and dying out within a month?
@NaitourufuN, October 2, 2020
SEE MORE EXAMPLES

Slender Man primarily refers to the creepypasta character and his many fan-created depictions. Of course, the Slender Man universe also includes video games, movies, and plenty of fan art.

I love this Game!! How do you like the game?#SlenderMan pic.twitter.com/G9q60VbZpB

The character is a popular Halloween costume and sees a revival in interest in fall.

Halloween plans are either:
-Going to a party
-Dressing up as slender man and scaring people
-Staying home and watching ghostbusters

This is not meant to be a formal definition of Slender Man like most terms we define on Dictionary.com, but is rather an informal word summary that hopefully touches upon the key aspects of the meaning and usage of Slender Man that will help our users expand their word mastery.