What does Friday the 13th mean?

Friday the 13th refers to a calendar date superstitiously associated with bad luck and evil doings.

Where does Friday the 13th come from? 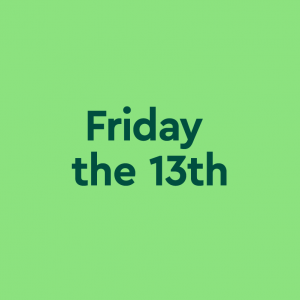 When the 13th day of any month falls on a Friday, generally referred to as Friday the 13th, it is popularly believed that it will bring bad luck, terrible occurrences, and even fatal accidents.

The exact origins of Friday the 13th, as a term and superstition, are unclear.

Anthropology professor Phillips Stevens Jr. has argued that fear of this day may date back to the Middle Ages, when it may have been inspired by Christian beliefs about the death of Jesus Christ. According to Stevens, Jesus’s Last Supper is said to have had 13 participants, including Jesus, and occurred on the evening before his crucifixion on a Friday, leading to dark associations between Friday and the number 13.

Other theories point more generally to superstitions surrounding the number 13 as an unlucky number and Friday as an unlucky day of the week.

In the early 1900s, Thomas Lawson’s novel Friday, the Thirteenth, told a story about a broker using his superstitious beliefs to win big in the stock market.

The term and superstition rose to great prominence in 1980 with the release of the slasher horror film Friday the 13th, starring the undead, machete-wielding, hockey goalie mask-wearing murderer Jason Voorhees (first played by Ari Lehman). In the film, Friday the 13th is referred to as “Jason’s birthday,” and in the decades since, 12 Friday the 13th sequels, a comic book, a TV series, and various memorabilia have cemented the association between the franchise and Friday the 13th.

Scientists have explored how people who think Friday the 13th is an unlucky day may be priming themselves for unlucky episodes on the day, à la self-fulfilling prophecy, but the day is not statistically worse than other days.

Examples of Friday the 13th

we all cheered upon seeing a black cat cross the street in front of our car happy friday the 13th
@blondewithab00k, December 13, 2019
Art Bell, a self-proclaimed expert on the paranormal who hosted a popular syndicated radio show for decades, has died at the age of 72—on Friday the 13th, appropriately enough.
Thom Geier, The Wrap, April 14, 2018
Had a great idea earlier; Trump is here on Friday the 13th. Have the streets deserted except for a series of identically dressed Jason Voorhees, just watching him go past. Turn a corner and there's another. Everyone else in the car has to pretend they are seeing crowds of people.
@2hrTV, April 27, 2018
SEE MORE EXAMPLES

Who uses Friday the 13th?

Friday the 13th, which occurs whenever the 13th of any month falls on a Friday, is described as a day when bad things happen in the popular imagination and culture, especially when a Friday the 13th falls in October before Halloween. Halloween merchandise and content often incorporate Friday the 13th for spooky effect.

Popular articles on the cultural phenomenon circulate online on Friday the 13th dates, as do jokes and casual references on social media.

Is it Friday the 13th because today has just been full of bad luck?

Due to the popularity of the film character Jason Voorhees, the term Friday the 13th is often used to refer to the movies and their horror tropes. For example, if a group of teenagers is camped out in the woods and hears a sound in the distance, one could say, “Be careful, this seems like a Friday the 13th situation.”

my aesthetic is 80’s friday the 13th movies

Fear of Friday the 13th is sometimes referred to as paraskevidekatriaphobia, which began as a deliberately fanciful coinage.

This is not meant to be a formal definition of Friday the 13th like most terms we define on Dictionary.com, but is rather an informal word summary that hopefully touches upon the key aspects of the meaning and usage of Friday the 13th that will help our users expand their word mastery.