Who is Jeff the Killer?

Jeff the Killer is a fictional character in the online horror fiction subgenre, creepypasta. He is depicted as a pale, noseless man with long black hair and a Joker-esque grin carved into his face, known for his pre-murder catchphrase, “Go to sleep.”

Where does Jeff the Killer come from? 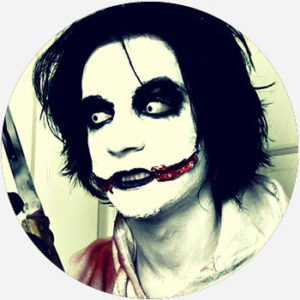 Jeff the Killer is a character that emerged from creepypasta, a popular subgenre of user-generated internet urban legends and horror stories. He is one of a few creepypasta characters that originated with an image (along with Slender Man, the Rake, and others). Jeff the Killer possibly first introduced in 2008 on the entertainment website Newgrounds by user killerjeff.

Stories began to appear on creepypasta sites around October that year, when a two-and-a-half minute YouTube video was uploaded by user Sesseur explaining the fictional backstory of how Jeff accidentally bleached his face while trying to clean his bathtub, accounting for some aspects of his appearance. From there, numerous stories about Jeff the Killer began spreading rapidly through various forums as people began taking liberties with the stories regarding Jeff, his face, his motives, and his methods of killing. These also helped to cement his catchphrase, “Go to sleep,” which he whispers before any slaughter. 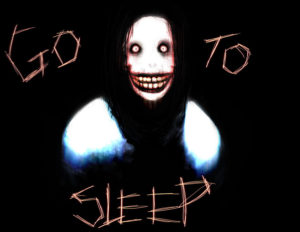 The question of the original photo’s origins has come up repeatedly since Jeff the Killer’s inception. The creepiness of the character is enhanced by the rumor that the original killerjeff’s heavily edited photo was taken from a girl named Katy Robinson, who posted a low-quality photo of herself on a 4chan imageboard in early 2008. Supposedly, Katy’s sibling later reposted the picture to announce to the 4chan community that Katy had committed suicide due to the bullying she had received regarding her weight and appearance in the photo. The story of Jeff the Killer’s photo originating with Katy Robinson is popular in the character’s mythology, but the credibility of the internet myth is unclear.

Jeff the killer is REAL and he is my FRIEND

Interest in Jeff the Killer peaked on Google Trends in October 2014, and a popular YouTube video of the character facing off in a Spanish-language rap battle against fellow creepypasta Slender Man was uploaded in November 2014.

Examples of Jeff the Killer

I was having a sleepover at my house with my friend and my mom kept saying 'go to sleep' and I screamed JEFF THE KILLER!
@Pinkamina234578, March 2017
So we may have the origin of the Jeff the Killer legend — but we still aren't sure about the Katy suicide legend.
Annalee Newitz, “Who is Jeff the Killer? And is his picture haunted by a real death?” io9, August 5, 2013 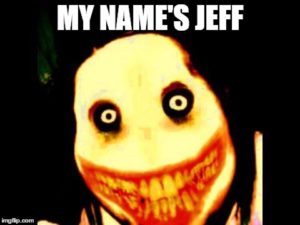 Who uses Jeff the Killer?

Jeff the Killer primarily refers to the creepypasta character and his many fan-written stories and depictions. However, some people familiar with the character will use Jeff the Killer to insult appearances or as a reference to Goth aesthetics.

So now I'm apparently goth if Jeff The Killer is my display picture? That rocks :| pic.twitter.com/u1BKGjLLcQ

what is yout fav creepypasta

i love jeff the killer pic.twitter.com/N8OQi6JHA0

This is not meant to be a formal definition of Jeff the Killer like most terms we define on Dictionary.com, but is rather an informal word summary that hopefully touches upon the key aspects of the meaning and usage of Jeff the Killer that will help our users expand their word mastery.