What does Sonic.exe mean?

Sonic.exe is a viral horror story that concerns an evil version of the video game character, Sonic the Hedgehog.

Where does Sonic.exe come from? 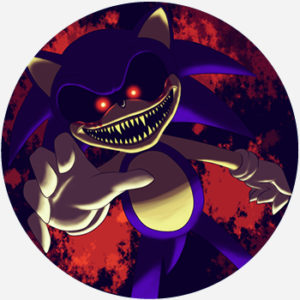 Sonic.exe is part of a genre of online horror stories known as creepypasta.

In August 2011, user JC-the-Hyena submitted a story on the Creepypasta Wiki about a strange CD-ROM the narrator received from a friend. The CD had SONIC.EXE written on it (.exe is file extension designating an executable file). It centered around the video game franchise and character Sonic the Hedgehog. A prominent feature of the story was the look of its murderous incarnation of Sonic, who had been given black, bleeding eyeballs with glowing red pupils. The creator later explained that the creepypasta had been inspired by an edited screencap of the character.

Sonic.exe grew in popularity, and a game based on Sonic.exe was created in August 2012 by MY5TCrimson, along with other tributes and parodies. The game and story both gathered tributes and parodies. It’s not clear how much of the creepypasta’s appeal was due to its scariness or an ironic appreciation of its amateurish writing and clichéd style, which later got it removed from the Creepypasta Wiki. Part of the humor may lie in the juxtaposition of a cheery, silly video game with grim horror tropes.

“since i have no life and live in my room all day i decided that i wanted to make the unoriginal creepypasta sonic.exe more of a original character”
Maxwell Holland Facebook (March 20, 2017)
“Welp, what next? Fandroid.exe based off Sonic.exe? If so, I really want to make a fangame of it, lol”
@LPSplayers532 Twitter (May 4, 2017)
“It makes sense- fans of the big guys like Markiplier are constantly watching scary material, much of which is loosely based off of creepypastas (e.g. Slender and Sonic.exe).”
Griffin Cost, “3 Great Lesser Known Gaming Channels/Streams,” Gamer Headlines (August 22, 2014)
SEE MORE EXAMPLES

The sinister version of Sonic in the video game is sometimes called Sonic.exe, after the game. The creator has confirmed that they intended his name to be Sonic.exe or just Exe.

This is not meant to be a formal definition of Sonic.exe like most terms we define on Dictionary.com, but is rather an informal word summary that hopefully touches upon the key aspects of the meaning and usage of Sonic.exe that will help our users expand their word mastery.