What does space burger mean?

To entertain his viewers, Killem sent a McDonald’s Big Mac hamburger about 25 miles above Earth—and took a bite when it returned.

Where does space burger come from? 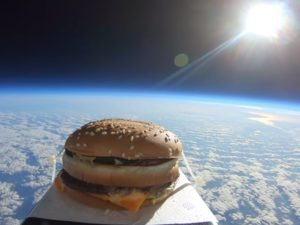 The voyage of space burger began with a video posted on March 28, 2019 by YouTuber Killem (Tom Stanniland), known for doing outlandish challenges. It was called “I Sent a McDonald’s Big Mac to Space & Ate It (First McDonalds Burger in Space).”

In the video, Killem managed to do just that. He bought a Big Mac, attached it to a weather balloon, and sent it up over 100,000 feet in the air. It was dubbed space burger as a result.

Technically, that distance isn’t considered outer space, which conventionally begins over 300,000 feet (62 miles) above Earth’s surface. But hey, let’s give it to Killem—and welcome back, space burger.

The space burger landed on the grounds of football (soccer) team Colchester United in Essex, England. Killem took a bit, remarking its taste was “not nice.” He then joined the team for an interview, garnered a tweet from McDonald’s UK, and the rest of the story is viral internet history. As of mid-April 2019, Killem’s video was closing in on 1 million views.

Hope you enjoyed the burgers!

With all due respect to those at the club we really don’t care that much about the ‘space burger’ and I’d politely ask you stop going on about it and focus on the football #colu
@GRBarnes04, April, 2019

We're wondering if there's even the tiniest chance a bite of the "spaceburger" will give him some kind of superhero like powers? / More likely though, it'll just leave him a bit gassy!

The space burger was discussed about on various news outlets, including the BBC, Today Show, The Weather Channel, and LADbible. This helped the space burger go viral, and conversation about it trended on Twitter in late March.

happy Saturday to all my followers I hope you will all forever be as free and happy as this burger that went up to space pic.twitter.com/nMCyW8Ste1

i can’t stop thinking abt the space burger……. possibly bc i found it AND then binged bobs burgers & i’m craving burgers now…👽🍔👽

This is not meant to be a formal definition of space burger like most terms we define on Dictionary.com, but is rather an informal word summary that hopefully touches upon the key aspects of the meaning and usage of space burger that will help our users expand their word mastery.