Tigger is a fictional tiger from the Winnie-the-Pooh children’s books and subsequent animated films, known for his energy and for bouncing on his tail.

To tigger something is to break it while tweaking or adjusting it.

Where does Tigger come from? 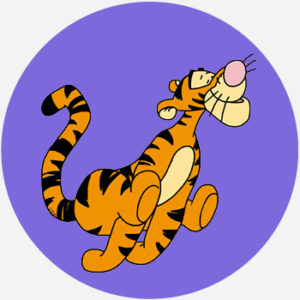 Prior to Milne, tigger was in use in the late 19th and early 20th century as the name for the pursuer in playground games similar to “tag.”

The adjective tiggerish also predates Milne’s work, appearing in a 1920 play review and a 1921 short story to mean ferocious or tiger-like. In 1931, tiggerish was used in another literary review, in the literary magazine Contempo, but this time to mean humorous and “bouncing,” and with direct reference to Milne. After that point, uses of tiggerish tend to follow the later example, describing someone as energetic or excitable.

Tigger’s rambunctious character may have also informed the verb to tigger, meaning “to break something,” which emerged in the early 20th century.

My checks be bouncin' like Tigger.
@hellofelicia14, January, 2018
I've entered my thirties, but my Tiggerish enthusiasm for change, and adventure, is undimmed. I won't become Eeyore for some time yet.
Phil Collins, Not Dead Yet: The Memoir, 2016
The other issue is that Microsoft itself has created its own reasons for not upgrading to Windows 10. It has written a pretty good operating system which was certainly better than Windows 8. But then tiggered the whole thing by bringing out mandatory updates, dodgy spyware and being as controlling as Apple.
Nick Farrel, Fudzilla, January, 2016
SEE MORE EXAMPLES

In addition to referring to the character, Tigger has been used as a name for house cats since at least 1941, when it appeared in The Ladies Home Journal. Recent surveys conducted by pet-insurance providers show that Tigger remains a popular cat name in both the US and the UK. There is also a TV and radio host known as Big Tigger.

As with tiggerish, likening some to Tigger is to characterize them as “lively” and “cheerful.”

Tigger also appears as a variant in the children’s counting rhyme: “Eeny, meeny, miny, moe / Catch a tigger by the toe.” Here, tigger may be used an alternative to tiger or as a substitute for a racist term used in some older versions.

The verb to tigger is most often used in regard to electronics or software.

This is not meant to be a formal definition of Tigger like most terms we define on Dictionary.com, but is rather an informal word summary that hopefully touches upon the key aspects of the meaning and usage of Tigger that will help our users expand their word mastery.