Who is Tony Montana?

Tony Montana is the main character in the 1983 film Scarface. A Cuban immigrant who enters into a life of crime as he seeks success in America, Antonio “Tony” Montana is known for his violence, cocaine habit, and for the movie’s iconic final scene in which he wields an M16 assault rifle while shouting “Say hello to my little friend!”

Where does Tony Montana come from? 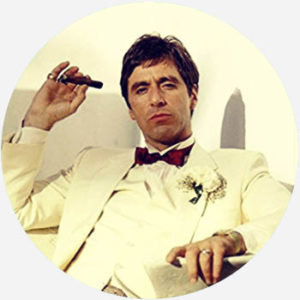 The character of Tony Montana first appeared in the 1983 film Scarface, which was a remake of a 1932 film of the same name. Played by Al Pacino, Tony Montana’s rise to success through the Cuban-American drug trade and the mob grabbed public attention and made the character a symbol of crime and corruption, as well as the struggle for success. Pacino was nominated for a Golden Globe Award for the role. Tony Montana remains a recognizable figure in American cinema, often associated with the “gritty” subject matter of organized crime and the cocaine epidemic of the 1980s.

“The closest real-life analogue to Tony Montana's personality.”
Chris Mertan Facebook (October 10, 2014)
“The UN's selection of Saudi Arabia 2 sit on the committee 4 human rights is like Tony Montana sitting on the committee for The War on Drugs.”
NAPOLEON LEGAL @napoleanlegal Twitter (April 24, 2017)
“Tyson Fury has posted a picture of Tony Montana surrounded by cocaine with his face superimposed in place of the Scarface character's.”
Jack Rathborn, “Tyson Fury posts Tony Montana picture with own face superimposed on the fictional drug kingpin after testing positive for cocaine,” The Mirror (October 1, 2016)
SEE MORE EXAMPLES

References to Tony Montana outside of discussions of Scarface are often made in regards to drugs (specifically cocaine), violence or other displays of “toughness,” or stories of someone rising to success from a background of nothing. A person wishing to assert their dominance, power, or influence might refer to themselves as Tony Montana. Similarly, someone involved with using or selling cocaine might be called Tony Montana.

Tony Montana can also be used as a verb or an adjective. The name can refer to several acts or qualities related to the character’s infamous exploits: being successful as a drug dealer (“He Tony Montana’d that neighborhood, now everyone owes him money”), attacking someone violently, as Tony does at the climax of the movie (“I went Tony Montana on his ass with my water gun”) or even speaking in movie quotes or with the character’s distinctive voice and accent (“My dad wants to ground me? He will face my wrath. *Tony Montana voice* Say hello to my leetle friend!”)

Tony Montana is also the name of a song by rapper Future, released as a featured single in 2011.

This is not meant to be a formal definition of Tony Montana like most terms we define on Dictionary.com, but is rather an informal word summary that hopefully touches upon the key aspects of the meaning and usage of Tony Montana that will help our users expand their word mastery.