Umbridge refers to the fictional character Dolores Umbridge, a malevolent, uptight, and pink-garbed villain in the Harry Potter series.

Where does Umbridge come from? 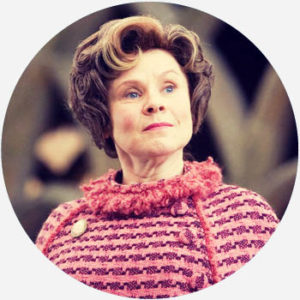 Dolores Umbridge is introduced in J.K. Rowling’s fifth Harry Potter book, Order of the Phoenix (2003), as a professor sent from the wizarding world’s governing body to oversee the magic school, Hogwarts, which she does with a tyrannical bureaucracy. The character was memorably played by Imelda Staunton in 2007 and 2010 film adaptations of the books.

Umbridge is a much-hated villain in—and out—of the world of Harry Potter, particularly due to her cruelty and loyalty to Lord Voldemort, the evil antagonist of the series. She is characterized as controlling and sadistic, harboring an especial hatred of magical creatures.

In ironic contrast to her personality, Umbridge is fond of wearing old-fashioned, frilly pink clothing and likes to decorate her offices with china plates featuring images of cats.

J.K. Rowling chose the name Dolores Umbridge to reflect her character. Her first name comes from the Latin word for “sorrow” or “pain,” dolor. Umbridge is a play on umbrage (“offense” or “annoyance”), which comes from the Latin umbra (“shade” or “shadow”). The word usually appears in the phrase to take umbrage.

I feel like I can hear the theme song for Umbridge every time I see footage of Trump
@sydmorgans, January, 2018
I just realized how Carmelita Spats is like a child version of Dolores Umbridge. I wanna throw both into a meat grinder 🙂 #ASeriesOfUnfortunateEvents
@karlaalag, March, 2018
As newly-single Sandra in “Finding Your Feet,” the 62-year-old BAFTA-winning actress dances her way through London’s Piccadilly Circus, goes viral online and lets loose in a way “Harry Potter’s” malevolent Dolores Umbridge could scarcely dream.
Keira Alexander, AM New York, March, 2018
SEE MORE EXAMPLES

Outside of discussion of the character in Harry Potter media and fandom, references to Umbridge most often compare her to other fictional characters or real people. The comparisons usually target her cruelty, though also her frumpy, pink attire, status as a professor and bureaucrat, and alliance with evil.

Though they may have some qualities (including pronunciation) in common, Umbridge the character is not be confused with the word umbrage.

This is not meant to be a formal definition of Umbridge like most terms we define on Dictionary.com, but is rather an informal word summary that hopefully touches upon the key aspects of the meaning and usage of Umbridge that will help our users expand their word mastery.