What does valar morghulis mean?

Where does valar morghulis come from? 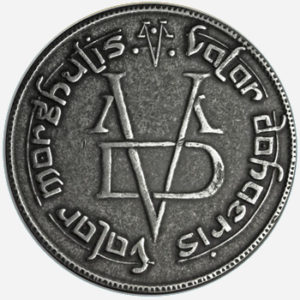 High Valyrian is a language constructed by David J. Peterson for HBO out of some words, including valar morghulis and valar dohaeris, that George R.R. Martin used in his Song of Fire and Ice novels the show is based on. It’s described as the Latin of Westeros because it is the language on which many other languages are built. As such, not many characters in the book- and TV-series actually speak High Valyrian.

Valar morghulis is one of the phrases in High Valyrian that has evolved into contemporary use as an adage in the world of Game of Thrones. The phrase is so central to the series that “Valar Morghulis” is also the title of Episode 10 of Season 2 (June 2012), and all promotional posters for Season 4 featured the phrase.

Valar morghulis has spread as one of the most recognizable phrases from Game of Thrones in the real world, too. Amazon sells more than 3,000 items, mostly clothing items or recreations of props from the show, featuring the phrase. Brewery Ommegang, a New York-based brewery, partnered with HBO to release a line of Game of Thrones-themed beers, including Valar Morghulis (2014) and Valar Dohaeris (2016).

A side note: Thanks a lot, TV execs, for arranging to have two of the events I most wanted to watch all year broadcast simultaneously. Valar morghulis to you, too
Christopher Orr, The Atlantic, June 2014
One of my favourite quotes from the bible is: 'teach us to number our days so that we may apply our hearts unto wisdom.' Constant reminder that Valar Morghulis
@hassytee, January 2018
Game of Thrones was never the show to tune into for happy endings (Happy Endings was, before it was canceled), but lately that has been the case. Benioff and Weiss would be wise to heed the words of Herzog and to recall that the protagonist of his film, the audacious and fearless Timothy Treadwell, ends up being eaten by a bear. Valar morghulis, indeed.
John Walters, Newsweek, June 2016
SEE MORE EXAMPLES

Many Game of Thrones fans understand the meaning of valar morghulis and use it in actual conversation, even though it’s a phrase from a fictional language.

Because of Game of Thrones’ reputation as a series willing to kill off even the most well-beloved characters, several media outlets have borrowed valar morghulis for their Game of Thrones recaps of and discussions about character deaths. For example, the Washington Post has adopted the phrase for the title of its ongoing “illustrated guide to all 1,243 deaths in ‘Game of Thrones’” feature, and FanSided releases a weekly column, with the phrase as a running title, during the airing of current seasons to predict which character will die next.

This is not meant to be a formal definition of valar morghulis like most terms we define on Dictionary.com, but is rather an informal word summary that hopefully touches upon the key aspects of the meaning and usage of valar morghulis that will help our users expand their word mastery.