What does bi erasure mean?

Bi erasure, a short form of bisexual erasure, is the act of ignoring, explaining away, or otherwise dismissing bisexuality in culture, media, or history.

Where does bi erasure come from? 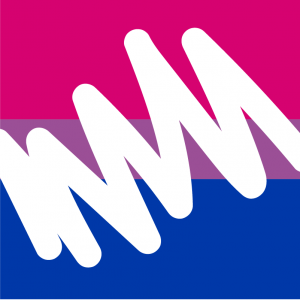 Bi erasure is based on many stereotypes about bisexuals, the prevailing one being that it isn’t a full-fledged sexual orientation but rather a stepping stone or phase before a person “settles on” being gay (or not).

The prejudice of bi erasure can be felt so deeply that those who are bisexual will hesitate in identifying themselves as such—they feel invisible, or as if they have been erased in the broader culture.

Bi erasure emerged in tandem with biphobia (discrimination against bisexual individuals) by at least the 1990s.

Bi erasure received mainstream attention when the Netflix show Orange is the New Black was released in July 2013. The show was criticized for referring to bisexual characters as either straight or “ex-lesbians.”

In 2016, social-media website Twitter was accused of bi erasure after its algorithm began blocking words and hashtags deemed inappropriate. One outcome was that no photos appeared when “bisexual” was searched. Users vented their frustrations at what Twitter called “a mistake.”

bi erasure is such a big problem because it comes mainly from the lgbt community itself..... so sad
@M3LLICA, January, 2016
...that's how bi erasure tends to go. As Meg-John Barker pointed out in their best-selling book Queer: A Graphic History, “Bisexuality is rarely allowed to exist in the present.” Bisexuality is either seen as a futuristic state with no genders and labels, or it's seen as something binary and regressive. Never does it exist for its own sake.
Lois Shearing, Advocate, September, 2018 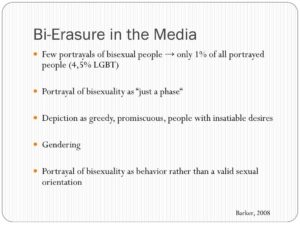 Both straight and queer people may be guilty of overt or covert bi erasure, such as ridiculing bisexual individuals as indecisive or sexually greedy rather than acknowledging the legitimacy of their sexual orientation.

Bizarre to me that so many ostracized groups of people are out here talking about how hated they are yet in the same breath will hate on their own kind??? Trans people being transphobic, gays being bi/panphobic and participating in erasure, POC being colorist? It's fucked.

Bisexuals are, rightfully, quick to call out this behavior, and the term is commonly used in discussions of LGBTQ social justice and media criticism and studies. Bi erasure, for instance, has been used by actor Amandla Stenberg in reference to her own bisexuality and pansexuality in 2016.

Bi erasure notably came up in 2018 regarding actor Cynthia Nixon, who identifies as bisexual, during her run for governor of New York.

That year, bi erasure was also a topic of conversation during the release of the film Bohemian Rhapsody about Freddie Mercury, frontman of the rock band Queen. Critics claimed the film participated in bi erasure by portraying Mercury as gay when he was bisexual.

This is not meant to be a formal definition of bi erasure like most terms we define on Dictionary.com, but is rather an informal word summary that hopefully touches upon the key aspects of the meaning and usage of bi erasure that will help our users expand their word mastery.