What does prima nocta mean?

Prima nocta is the semi-historical legal right of a monarch to have sex with any female subject, particularly on her wedding night.

Where does prima nocta come from? 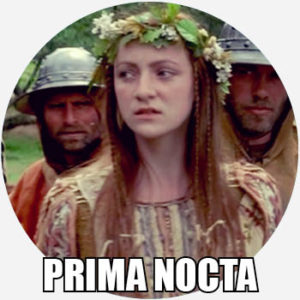 The phrase prima nocta, based on the Latin “first night,” is a shortened and corrupted from jus primae noctis, “right of the first night.” It generally names an ancient tradition in which all noble lords, whether kings or dukes, had the right to have sex with any of their female subjects—regardless of their will and even with a virgin bride—on her wedding night.

One of the earliest first known references to this feudal, misogynistic tradition appears in the second-millennium BCE Mesopotamian Epic of Gilgamesh, though the term prima nocta itself isn’t used. It’s also mentioned, though again not as prima nocta, in the fifth-century BCE Histories by Ancient Greek historian Herodotus.

While there are many references to the custom throughout the centuries, scholars since the 1800s have questioned whether such a law ever truly existed or was practiced, with many believing it was simply a trope used to make rulers seem more barbaric. It it possible that prima nocta may have been real, and because its victims had no or low social status, the instances were never recorded. There’s also no clear-cut evidence that the phrase jus primae noctis was ever used as the formal name of any law.

A traditional phrase for prima nocta is the French droit du seigneur (“right of the lord”), but by the late 1800s, it was going by the Latin jus primae noctis, whose particular origins are unclear. It evolved to jus prima noctae by the 1900s and prima nocta by the end of the century. The phrase is not considered grammatically correct in Latin.

Prima nocta rose to prominence after it played a key role in the 1995 Mel Gibson film Braveheart. In the movie, prima nocta was used—just like scholars have noted—to make the film’s villains look even more cruel and dastardly. The use of prima nocta in the film was widely discussed as one of Braveheart‘s many historical inaccuracies.

Outside Braveheart, the sitcom The Office and the action film Avengers: Age of Ultron mention prima nocta. A version of the law also appears in the the popular HBO series Game of Thrones, though it is officially referred to as “first night.”

the mypillow guy personally sleeps on every mypillow to ensure that each one is technically his. it's prima nocta, folks, rules are rules
@rinbcage, January, 2018
While US airlines demand the right of prima nocta from their passengers, I just collected my third fine as compensation for delayed flights from the fine folks of Norwegian AIr, courtesy of EU regulations.
@EnriqueDiazAlva, February, 2018
Later, in preparation for Phyllis (Phyllis Smith) and Bob Vance’s (Robert Shafer) wedding, Michael instituted Prima Nocta, which gave the king the opportunity to deflower the bride on her wedding night.
Steven Thrash, Screen Rant, July, 2017
SEE MORE EXAMPLES

Prima nocta is often used as a reference to the difficult and downtrodden lives of peasants in the feudal system and the oppression of women throughout human history, both of which are true even if the specific history of prima nocta is dubious.

In contemporary speech and writing, prima nocta can be a shorthand for patriarchy and misogyny due to its power structure and sexual violence. As a result, it may be considered offensive to make light of prima nocta.

Nevertheless, prima nocta sometimes characterizes overreach by governments, corporations, or other powerful entities. For example, someone who doesn’t like a new law could say that their state is “declaring prima nocta” on them. Prima nocta might also be used to describe an overpaid, pampered person, particularly a professional athlete or celebrity (e.g., “What are they going to add to his contract next, prima nocta?”). People also sometimes use prima nocta as a colorful way of referring to “first dibs.”

Though prima nocta is most popular, other variations, particularly jus primae noctis, are understood by people familiar with the term.

This is not meant to be a formal definition of prima nocta like most terms we define on Dictionary.com, but is rather an informal word summary that hopefully touches upon the key aspects of the meaning and usage of prima nocta that will help our users expand their word mastery.