5/7 is an internet meme referring to an unusual film rating scale developed by a Facebook user. It’s used allusively to express ironic or earnest appreciation of online content. 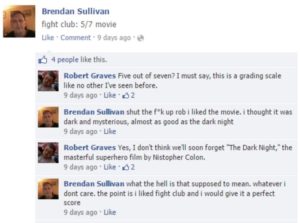 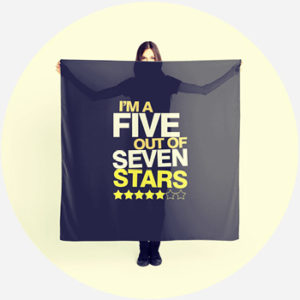 The term 5/7 originated on Facebook in November, 2017, when apparent user Brandon Sullivan posted the status “fight club: 5/7 movie.” Sullivan had previously been “trolled” by another Facebook user, Robert Graves, for his controversial views.

Graves responded to Sullivan’s 5/7 post by remarking “Five out of seven? I must say, this is a grading scale like no other I’ve seen before.” Sullivan defended his rating system and added: “why do you do htis [sic] on every single status i post. seriously.”

This exchange, along with other examples of Graves’ Facebook trolling, was screen-captured and shared on Imgur by user FreshPrinceofDenmark under the heading “Robert Graves: Legend” in December, 2015. It quickly became popular, garnering over 463,000 views in the first 48 hours, as people found the 7-based rating scale odd and arbitrary, as most systems are based out of 5 or 10.

The picture was reposted on aggregator website FunnyJunk and the Reddit group /r/OutoftheLoop, where it also gained immediate attention. Within days, the 5/7 exchange spread as a meme as a humorous rating scale. For example, on December 7, 2015, user8550 posted a picture of a man saving a sea turtle to Imgur, captioned: “I Give This Man 5/7.”

On December 15, 2015, Graves revealed that he had created the character Brandon Sullivan to satirize knee-jerk reactions to controversy on the internet.

5/7 is mainly used as an inside joke on social-media platforms like Reddit to express approval of various content—often of films, but not exclusively. In one example, a video of a sleepy pug puppy is tagged “5 out of 7,” indicating the user finds it excellent in tongue-in-cheek allusion to the 5/7 meme.

The expression a solid 5 out of 7, a play on a solid 10 out of 10, also appears on social media, as does a perfect 5/7, comedically amplifying the ratio into “a perfect score.” While initially the expression was ironic and internet self-referential, later uses like a solid or perfect 5/7 came to express genuine approval for something of minor note.

While 5/7 has declined since its December, 2015 peak, it still enjoys occasional currency online. One instance, posted to the platform 9Gag in October, 2017, showed a German cinema chain’s rating of the film It with five stars out of seven and commented: “This cinema’s rating system looks familiar.”

The internet 5/7 is not related to a five-to-seven relationship, a French-based expression referring to extramarital affairs permitted between 5 and 7pm, or the common photo dimensions of 5×7, or five by seven inches.

This is not meant to be a formal definition of 5/7 like most terms we define on Dictionary.com, but is rather an informal word summary that hopefully touches upon the key aspects of the meaning and usage of 5/7 that will help our users expand their word mastery.