What does forever alone mean?

Forever alone is a popular, usually humorous way for people to express online that they will never find lasting love and be single until the day they die.

Where does forever alone come from? 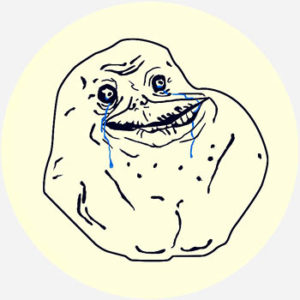 The phrase forever alone has been used as a dramatic expression of loneliness since at least the mid-1800s, notably used in an 1876 poem by Margaret Lawrence Pray, “Then and Now,” which features the lines, “My life one echoless monotone, / Alone, alone—forever alone.” But in modern consciousness, forever alone took off in 2010 as a rage comic character, apparently first created by illustrator Dominic Vanner. Rage comics are a popular online series depicting reactions to awkward, uncomfortable, or painful situations in a humorous light by means of a collection of computer-drawn, caricatured faces.

The forever alone rage comic has squashed, wrinkled head with an enormous jaw and dimpled chin, and a stick figure body. He is usually depicted as crying in the final panel of a comic along with the words forever alone, used a kind of punchline after some experience of failure, rejection, or isolation in romantic relationships. For instance, one comic begins with a stick figure coming home from work and announcing, “Honey, I’m home.” The character then eats a literal jar of honey, culminating in the forever alone face with traces of honey on his lips.

The forever alone face appeared in a popular 2010 video game, Super Meat Boy, and a marketing campaign by Sony Ericsson’s Xperiathon, a solo marathon project. Interest in the phrase forever alone peaked on Google Trends in 2012—right around Valentine’s Day.

The forever alone rage comic became popular to the point that the expression forever alone took off as its own meme in the mainstream, and is often used as a hashtag or a reaction comment in social media.

“Maven to a crowd of 500+ people who were super loud all day: 'Any single ladies out there for Jack?!' Not a single peep. I'm forever alone”
Jack Dunlop @CouRageJD Twitter (March 26, 2017)
“So, there isn’t some magical force ensuring that there is ‘someone for everyone.’ And, there are guys (and women) for whom relationship success comes easy and often. Others struggle but find themselves in relationships occasionally. But, for a select few, forever alone really does seem to apply.”
Jonathan Bennett, “Forever Alone Guys? Science Says Yes.” The Popular Man (January 30, 2017)
“Surely, by now, you've heard of the 'college meme' trend that has America's university kids trying their hand at campus-specific Internet humor -- and OG 4chan nerds crying a 'forever alone' river about how everyone is butchering their meme babies.”
Simone Wilson, “UCLA vs. USC: The Meme War,” LA Weekly Web of Loneliness (February 15, 2012)
SEE MORE EXAMPLES

Whether as a rage comic face or on its own, the forever alone meme is widely used to express, to a humorous extreme, the conclusion that one is destined to never find love, happiness, or romance—that they are destined to be single or bungling their relationships and there’s just nothing they can do about it.

While forever alone can convey a level of loneliness or angst, it’s most frequently used to humorous, self-consoling effect, as if to underscore how universal, even irrational, it is to feel doomed to be forever alone.

Forever alone is almost always used with a satirical, self-deprecating air of defeatism. The phrase forever alone has also been embraced as a positive sentiment, used to signal, for instance, the benefits of taking the time to be single rather than constantly dating just for the sake of it.

This is not meant to be a formal definition of forever alone like most terms we define on Dictionary.com, but is rather an informal word summary that hopefully touches upon the key aspects of the meaning and usage of forever alone that will help our users expand their word mastery.