What does Hey Girl mean?

Where does Hey Girl come from? 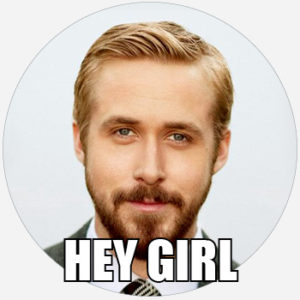 Gosling’s first appearance as a meme likely began in December 2008, on the Tumblr fan site FuckYeah! Ryan Gosling, which posted several images of Gosling, including one captioned with a romantic Hey Girl caption. The positive feedback to the image led to the site producing more Gosling image macros with Hey Girl statements. The growing number of Hey Girl memes came to mainstream attention in 2010 when Gosling read some of the text from various images during an MTV interview. Shortly afterward, new blogs, including the very popular Feminist Ryan Gosling, began creating Hey Girl memes.

On Feminist Ryan Gosling, each image is accompanied by a feminist theory introduced with “Hey girl.” For example: “Hey girl. Gender is a social construct but everyone likes to cuddle.” and “Hey girl. We don’t need arbitrary beauty archetypes steeped in historically biased ideologies pumped out to us by mediocre, archaic forms of media to define our sexiness.”

Like many memes, the Ryan Gosling Hey Girl memes can make specific references to any subject, though they continue to be chiefly associated with feminism and romance. Gosling’s face and the Hey Girl phrasing have since become ubiquitous in meme culture. It is often associated with another famous Gosling meme, Ryan Gosling Won’t Eat His Cereal.

This is not meant to be a formal definition of Hey Girl like most terms we define on Dictionary.com, but is rather an informal word summary that hopefully touches upon the key aspects of the meaning and usage of Hey Girl that will help our users expand their word mastery.