or Hodor or hold the door [hoh-dohr]

What does the Hodor meme mean?

Hodor memes reference the character Hodor from the television series Game of Thrones and the book series A Song of Ice and Fire. They may more specifically allude to the “hold the door” moment in the Game of Thrones episode “The Door.”

valar morghulis, khaleesi, One does not simply, Snuffleupagus, Simple Jack

Where does Hodor meme come from? 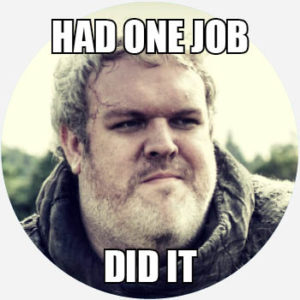 Hodor is a character in the TV series Game of Thrones, which is based on the book series A Song of Ice and Fire by George R. R. Martin. Hodor assists the character Bran, who cannot walk, by carrying him. Throughout the series, he is apparently unable to speak except for the seemingly nonsensical word hodor, after which he is named.

In the fifth episode of season six, which aired May 22, 2016, viewers learned the reason for Hodor’s speech difficulties. Due to a sort of psychic time-travel connection instigated by Bran, both the older and younger version of Hodor are ordered to “hold the door” of a hideout simultaneously, and the younger version feels what the older version is experiencing. The older Hodor dies protecting Bran and “holding the door.” This trauma of experiencing his own future death makes “hold the door” the only thing the young Hodor can say, repeated to the point of contraction into Hodor.

Fans of the series promptly saw an opportunity for humor in this tragic moment. They joked about crying when asked to hold doors, created a fake IKEA doorstop named Hodør, and stuck pictures of the character over the “hold” button in elevators. The meme appears to have been most popular in late May and early June of 2016, shortly after the episode aired.

I do not know what door I would need this doorstop for. But I do know that I need this! #hodor pic.twitter.com/iDzGwpYAhJ

I know someone must have made a Hodor meme for the #filibuster by now. Where is it?!! #holdthefloor
@oJaison, June 2016
Man u spoiled my game of thrones by that hold the door hodor meme
Facebook, June 2016
“Something our bros D&D did not apologize for: every other Hodor meme you have ever memed is now unfunny, even if it was once funny, and in that sense, this is the most brutal murder that Game of Thrones has ever inflicted on us.”
Kaitlyn Tiffany, “The best and worst of the internet's uninspired Hodor jokes,” The Verge (May 25, 2016) 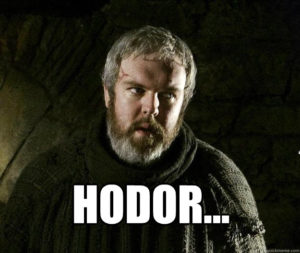 The Hold the door scene is perhaps the most pervasive Hodor meme, and fans frequently reference it as an especially heartbreaking moment in the TV series.

Watching Hodor holding the door for the last time #GOT pic.twitter.com/lpttYbylYb

Even before “The Door,” Hodor had been the subject of many other memes. His close relationship to the character Bran, single-word vocabulary, and pun-able name have made him the subject of many pop culture jokes and image macros. References to Hodor memes, particularly those prior to the airing of “The Door,” may sometimes refer to these memes instead of the hold the door version.

My natural response for when I get flustered by something is to say "Hodor" over and over again.

This is not meant to be a formal definition of Hodor meme like most terms we define on Dictionary.com, but is rather an informal word summary that hopefully touches upon the key aspects of the meaning and usage of Hodor meme that will help our users expand their word mastery.