Feedback
Techno Viking
the cake is a lie

What does Thanks, Obama mean?

Thanks, Obama is a meme in which the 44th president of the United States is blamed, often humorously, for various misfortunes.

Where does Thanks, Obama come from? 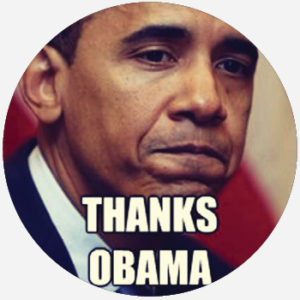 Early uses of the phrase Thanks, Obama appeared on social media during Barack Obama’s campaign for president. The earliest example on Twitter sees a user literally thanking then-Senator Obama for adding her as a friend on social media, in May 2007. Other early examples include sarcastically thanking Obama for the traffic jams caused by his campaign events while others used the phrase to criticize the potential outcomes of some of the candidate’s policy proposals. Although this sarcasm is more in line with the phrase’s later use, some on Twitter also gave genuine thanks to Obama during the campaign.

The hashtag #thanksobama was first used in 2009, in response to the proposal of a value-added tax. In the following years, the hashtag was, again, used both sincerely by Obama’s supporters and sarcastically by his detractors.

Also in 2009, a blog titled Authentic Connecticut Republican posted a demotivational poster meme with a photo of a little girl flipping off the viewer and the text “Thanks, Obama. You’ve spent my lunch money, my allowance, my inheritance, 35 years of future paychecks and my retirement. You asshole.”

The perceived overuse of the sarcastic Thanks, Obama by conservatives eventually lead to a new use of the phrase to facetiously blame the President for any kind of negative event. By 2012, the website Quickmeme dedicated a page to the “Everything is Barack Obama’s fault” meme, featuring an image of the President looking downtrodden with captions like “My toast got burnt this morning” or “I got a paper cut” followed by Thanks, Obama.

In November of 2012, a Reddit user uploaded a GIF of a man in an infomercial knocking over a bowl of food with the caption Thanks, Obama under the subject line: “My family’s reaction to the last four years.” Another “infomercial fail” GIF with the same caption was posted in December 2012 with the subject line: “Lately, Republicans blame everything on Obama.” A subreddit, r/thanksobama, had its first post the same day. It also featured a GIF of a struggling person from an infomercial, captioned Thanks, Obama.

Obama himself became aware of the meme and referenced it on more than one occasion. In a 2015 BuzzFeed video aimed at raising awareness for the Affordable Care Act, the president responded to a cookie too large for his glass of milk by muttering “Thanks, Obama” under his breath. In a 2016 interview, the President concluded his remarks on the reduction of unemployment during his term with Thanks, Obama. Later the same year, he invoked the meme at a rally for Hillary Clinton, when an audience member made a comment about falling gasoline prices.

Even after Obama left office, the phrase and the hashtag have seen continued use in the press and on social media as an automatic, humorous issuing of blame, especially for ridiculously minor incidents or situations Obama could never have control over.

Examples of Thanks, Obama

“A 30 rack of coors light is $23 now at Sun Stop. Thanks, Obama.”
Eric Matthews @CampaignRPoz Twitter (September 20, 2014)
“The unemployment rate has now sky rocketed to 9.8 %. #thanksobama”
Jacob Doherty @Snake_Doherty Twitter (December 5, 2010)
“And, you may have even guessed that someone was going to find a way to bring President Barack Hussein Obummer into the fray and blame him for Grande’s lack of patriotism. Your wait wasn’t long as Fox & Friends went full ‘Thanks, Obama!’ on Thursday morning.”
Justin Baragona, “Thanks, Obama! ‘Fox & Friends’ Guest Blames President for Ariana Grande’s “I Hate America.”,” Contremptor (July 9, 2015)
SEE MORE EXAMPLES

Who uses Thanks, Obama?

The prototypical use of Thanks, Obama was to blame Obama for his failings and policy errors, real or perceived, but the phrase was later reappropriated by Obama supporters and used to mock the overapplication of that sentiment. Of course, the phrase has also been used to literally thank Obama.

This is not meant to be a formal definition of Thanks, Obama like most terms we define on Dictionary.com, but is rather an informal word summary that hopefully touches upon the key aspects of the meaning and usage of Thanks, Obama that will help our users expand their word mastery.

Techno Viking
the cake is a lie
Home / Words / Memes / Thanks, Obama