Antifa is a left-wing political movement, made up of various autonomous groups, that opposes fascism and other right-wing ideologies, often through militant protest tactics.

Antifa 📈 on Dictionary.com in June 2020 due to allegations that people protesting the deaths of George Floyd and Breonna Taylor were members of the movement. See the word that rose 668,840% in searches due to topics in the news.

Where does Antifa come from? 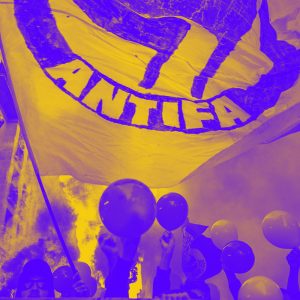 A notable antifascist movement emerged in the 1920s in opposition to the Italian fascist dictator Benito Mussolini. A German group—called Antifaschistische Aktion (“Antifascist Action”) and founded in 1932—was one of the first and most prominent organization to use the term in their name. Their logo features a red and black flag, imagery commonly used by Antifa groups today.

There is no one Antifa organization. Rather, the movement is made up of various groups and individuals united by their opposition to fascism, which is a” governmental system led by a dictator having complete power, forcibly suppressing opposition and criticism, regimenting all industry, commerce, etc., and emphasizing an aggressive nationalism and often racism.” As an antifascist movement, Antifa especially targets people and groups that support the oppression of minority groups.

Antifa activists generally support socialism, communism, and anarchism. The Antifa movement pursues direction action, especially in the form of protests against white supremacy, many of whose adherents espouse fascist beliefs. While many Antifa activities are nonviolent, if deliberately disruptive, some actions involve physical altercations, vandalism, and digital violations such as doxxing.

Antifa activists may be considered to be on "the left" of the political spectrum, but they have very distinct differences with liberals.
Joseph Milord, “Antifa Is Anti-Racist, But At What Cost?" Elite Daily, February 28, 2017
Physical confrontation is just a small aspect of antifa direct action, but the history of anti-fascist, anti-racist action is not one of so-called allies standing in polite disapproval or donning safety pins.
Natasha Lennard, “Anti-Fascists Will Fight Trumps’ Fascism in the Streets,” The Nation, January 19, 2017

Interest in Antifa spiked around the mid-2010s surrounding the election of President Donald Trump and the rise of the alt-right, which Antifa aggressively opposes. Antifa was notably involved in a counter-protest to the white supremacist and neo-Nazi rally, Unite the Right, in Charlottesville, Virginia, in 2017. A participant of the Unite the Right rally killed a woman, Heather Heyer, when he drove into a crowd of counter-protestors. Donald Trump was criticized after he made remarks many interpreted as expressing sympathy to Unite the Right participants.

Antifa again made news in 2020 when President Trump blamed the movement for rioting and looting that accompanied nationwide protests against the death of George Floyd, a Black man who died after a white police officer subdued him by kneeling on his neck for several minutes. Evidence for Antifa violence during these protests has not yet been provided. Amid the protests, Trump sought to declare Antifa a terrorist organization, although the U.S. government can currently only declare foreign groups as terrorist organizations—not to mention that Antifa has no single, central structure.

President Trump said the U.S. would designate antifa as a terrorist organization. But the laws that permit such an action are limited to foreign groups — and antifa is a vaguely defined movement of left-wing and anti-fascist activists, not an organization.https://t.co/UxkrLPe65T

The word Antifa can be used to refer to specific antifascists groups and individuals, as well as to antifascist activism in general. Antifa is still used in reference to historic and modern German antifascist groups, but has spread to characterize the movement as it has expanded all around the world. Antifa is often, though not always, capitalized, and is often be used as an attributive noun, e.g., an Antifa demonstration.

Antifa has widely been criticized by both the political left and right for its use of violence and destruction of property; Antifa adherents or sympathizers argue that their aggression is a legitimate act of self-defense against oppression. Increasingly, some opponents of Antifa use the term as a label for any person or group considered far left, and even for some lawful, peaceful protestors.

Due to controversies surrounding the movement, Antifa is a highly charged term and topic. Learn more about Antifa at the Anti-Defamation League.

This is not meant to be a formal definition of Antifa like most terms we define on Dictionary.com, but is rather an informal word summary that hopefully touches upon the key aspects of the meaning and usage of Antifa that will help our users expand their word mastery.