What does ballot harvesting mean?

In US politics, the term ballot harvesting is most commonly used by critics of the practice of groups or organizations collecting and turning in individual voters’ completed election ballots.

This practice is also referred to with the more neutral term ballot collection. The word harvesting is often seen as intending to imply that the practice results in (or is done as part of an effort to engage in) voter fraud.

Prior to 2021, the term ballot harvesting was used by President Donald Trump on multiple occasions leading up to the 2020 US presidential election when making comments critical of mail-in voting, which was forecasted to favor his opponent due to reported voting preferences among likely voters.

What’s the difference between absentee vs. mail-in voting? Gets all the facts with our full explanation on mail-in vs. absentee voting here for you.

Where does ballot harvesting come from? 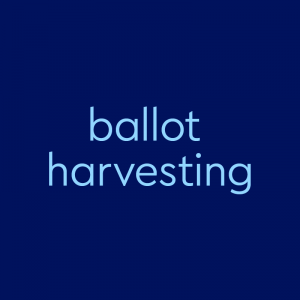 The term ballot harvesting emerges by at least the early 2010s.

In the US, state law governs who is legally able to collect ballots. Some state and local laws have sought to ban the collection of ballots, especially mail-in and absentee ballots, by unauthorized people or groups. The term ballot harvesting is typically used in this context.

The word harvesting can simply mean “collecting.” In ballot harvesting, though, it often carries a negative connotation that implies that the collection is being done as part of a crime. The word is used in similar negative ways in terms like data harvesting and organ harvesting.

For this reason, the term ballot harvesting is typically used by those critical of the practice, especially by conservatives and conservative groups opposed to mail-in voting. It is often used in claims that ballot collection is vulnerable to corruption or can be used to commit voter fraud.

Critics of laws that limit voting and voting rights point out that voting fraud is extremely rare, regardless of how a ballot is turned in, and that there is no evidence linking ballot collection with widespread voter fraud. They argue that bans on ballot collection restrict voting rights and further limit access for many groups, including senior citizens, disabled voters, and members of low-income households.

The term ballot harvesting is most commonly used as a critical way of referring to the practice of ballot collection. It’s typically used by conservative critics of mail-in voting to imply that the system is prone to corruption and fraud. Others view restrictions and bans on ballot collection as a violation of voting rights.

BREAKING NEWS: In 6-3 ruling, SCOTUS upholds two Arizona voting provisions: a ban on so-called "ballot harvesting," and a policy that throws out an entire ballot if it was cast in the wrong precinct. Challengers argued that both provisions discriminate against minority voters.

A bipartisan voting bill in Kentucky would establish some early voting in the state and allow voters to "cure" their absentee ballots, while also banning so-called "ballot harvesting" and making it easier to clear those who have moved off the rolls. https://t.co/QcvL1F8WCy

Georgia board of elections created drop boxes as a way to help people who were afraid of COVID and wanted to vote… but it's very clear they're against Georgia statute. Why is no one suing to have these drop boxes removed? They open the door to ballot harvesting in Georgia

This is not meant to be a formal definition of ballot harvesting like most terms we define on Dictionary.com, but is rather an informal word summary that hopefully touches upon the key aspects of the meaning and usage of ballot harvesting that will help our users expand their word mastery.