What does implied powers mean?

Implied powers are political powers granted to the United States government that aren’t explicitly stated in the Constitution. They’re implied to be granted because similar powers have set a precedent. These implied powers are necessary for the function of any given governing body.

Where does implied powers come from? 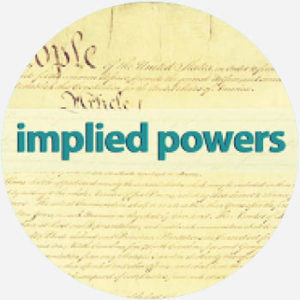 The concept of implied powers has existed since the Constitution was written, though the phrase itself has been around for longer than the Constitution itself has. In fact, it’s existed in political theory since at least the 1780s. An early work from 1785 references the implied Powers and Privileges of political bodies in Ireland. Since Ireland and its neighbors were already established as sovereign nations, it makes sense that the United States wouldn’t be the first to use the phrase. The phrase became more commonly associated with the United States and its Constitution as late as the 1810s.

The concept of implied powers became important in establishing the constitutionality of the First Bank of the United States. This bank would handle the war debt from the American Revolution and would help standardize the currency of the newly independent country. It was eventually built, but when it was proposed, citizens protested, saying that it didn’t abide by the founding document (the Constitution). In 1791, Alexander Hamilton stated that while the federal government is granted explicit powers via the Constitution, he also believed that the authority of implied powers should be recognized as an important part of the government’s ability to function properly. He believed that these implied powers should be treated as equal to the more explicitly conferred powers. He also stated that many other powers that the government exerts are actually only implied as well.

In 1819, the United States Supreme Court arbitrated the case McCulloch v. Maryland. The case was to settle a dispute about chartering the Second Bank of the United States. There were concerns about its constitutionality, since it was controlled by private stockholders, yet also served as the depository for federal dollars. State banks didn’t like this because this positioned the Second Bank as a direct competitor. And indeed, the state banks started failing in 1818 and blamed the Second Bank for their troubles.

The Second Bank also refused to pay the tax on banks not chartered within the state, which led to it being sued by the state of Maryland. Led by Chief Justice John Marshall, Hamilton’s statements about implied powers in government were officially affirmed. The court found that Congress had powers explicitly laid out by the Constitution, and also had the authority to do what it needed to do beyond the Constitution.

In this case, the Supreme Court ruled that although the Constitution didn’t mention the creation of banks at all, Congress did indeed have the power to do so via these implied powers. The power came through the Necessary and Proper Clause in Article I of the Constitution. This specifically relates to the creation of a national bank because the bank would serve as an agent, carrying out tasks explicitly conferred to the government, such as collecting taxes. The court case also ruled that the tax by Maryland on the Second Bank of the United States was unconstitutional.

“If "implied power' sounds like tricky lawyer talk, ask yourself the following question: Is the American flag unconstitutional? The Constitution doesn't make any reference to a national flag.”
Garrett Epps, “Constitutional Myth #7: The 10th Amendment Protects 'States' Rights',” The Atlantic (July 11, 2011)
“An emphasis on either the attributed powers or implied powers doctrine strikes the balance between organizational effectiveness and safeguarding member prerogatives differently.”
Jan Klabbers and Asa Wallendahl, Research Handbook on the Law of International Organizations (2011)
“So, as far as I’m concerned, what Washington decided regarding this issue of enumerated powers versus implied powers is by far the best guide to what the Founders intended.”
NBBooks, “Constitutional Foundation of the US Economy: Powers are Implied Not Enumerated,” Daily Kos (November 20, 2011)
SEE MORE EXAMPLES

This is not meant to be a formal definition of implied powers like most terms we define on Dictionary.com, but is rather an informal word summary that hopefully touches upon the key aspects of the meaning and usage of implied powers that will help our users expand their word mastery.