What does hit dog mean?

Hit dog comes from the expression a hit dog will holler, meaning that a very defensive reaction to an accusation can be an admission of guilt.

Where does hit dog come from? 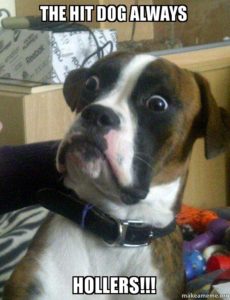 Describing someone as a hit dog in the context of a hit dog will holler has been evidenced as far back as the 1880s. The Washington Post attributed the proverb to a 19th-century preacher named Samuel Porter Jones.

Jones, a lawyer-turned-pastor, frequently used the expression, “throw a stone into a crowd of dogs, and the hit dog will holler.” The moral of the proverb is that people who are offended (hit dog) by an accusation (stone) will speak out in exasperated defense (holler) in a group (crowd of dogs). In doing so, the offended person reveals their own sense of guilt.

Like the man said, “a hit dog will holler.” https://t.co/FL5hTkk7hp

Over time the phrase was shortened to just a hit dog, its sense generalizing to the notion that one’s outrage reveals their own guilt in some matter. Imagine one partner asks the other, “Did you forget to take out the trash last night?” The other may fly off the handle: “Why are you always accusing of me not doing my chores? Why are you always nagging me? I can’t believe you’d think I’d forget.” We might call that person a hit dog.

As @AndrewGillum’s grandmother used to say, “a hit dog will holler”. The POTUS doth protest too much, methinks. https://t.co/RBywimwjBp

A hit dog will holler was catapulted into the public eye during the 2018 Florida gubernatorial election campaign. Democrat Andrew Gillum was attempting to become Florida’s first black Governor, running against a Donald Trump-aligning Republican, Ron DeSantis. When DeSantis was challenged on his associations with racists, he launched into an aggressive and floundering defense of himself. Gillum replied: “As my grandmother used to say: a hit dog will holler.” That is, DeSantis’s immediate defensiveness was a sign of guilt.

Where there is smoke there is fire. If it walks like a duck quacks like a duck it is a duck. A hit dog will holler.
@sherrishavon, June 2017
I sail into you on your dram-drinking, theater-going, card-playing, and dancing, and the town rises up in arms against me; but it is the hit dog that hollers, you may put that down.
Sam Jones, Sam Jones' Own Book, 1887

A Hit Dog Will Holler: Unbalanced Imperious Bully Attacks Free Press, Yanks Their Credentials and Likely Plans To Just Keep At It

Aside from its 2018 political fame, people have been implicated as hit dogs in a variety of contexts for over 140 years.

In south Georgia, there is an old saying that "a hit dog will holler." I never quite appreciated the truth of that saying until I saw the reaction of so many members of the British media to #PrinceHarry talking about unconscious bias. #JustSaying #YouAreTellingOnYourselves

As in the case of Andrew Gillum, it seems to be a popular aphorism passed down from grandmothers. Clearly, mothers in the South of a certain generation will gladly call-out a lot of knee-high hypocrites.

A hit dog will holler. Something black southern grandma's say when someone speaks from a guilty conscience.

This is not meant to be a formal definition of hit dog like most terms we define on Dictionary.com, but is rather an informal word summary that hopefully touches upon the key aspects of the meaning and usage of hit dog that will help our users expand their word mastery.