ISIS-K is an Afghanistan-based branch of the group known as ISIS, a radical Sunni Islamic organization widely regarded as a terrorist group.

As a branch of ISIS, ISIS-K is officially designated as a terrorist organization by the United Nations and the United States.

ISIS-K is thought to be largely aligned with the aims and beliefs of the larger group, including the goal of restoring an Islamic state, or caliphate, in the region.

Where does ISIS-K come from? 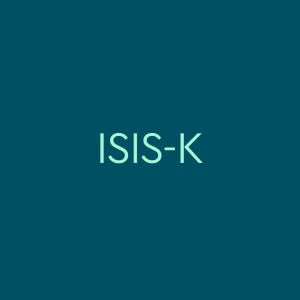 ISIS-K announced its formation in 2015. It is thought to have been established by hard-line former members of the Afghan and Pakistani Taliban (a group that it opposes).

In August 2021, it was reported that ISIS-K was responsible for multiple attacks that occurred during the withdrawal of US forces from Afghanistan, including a bombing at the Kabul airport that killed 13 US service members and more than 100 Afghan civilians. Media coverage of the attacks resulted in greater awareness of ISIS-K.

President says last night's U.S. attack on ISIS-K members "was not the last."
@WestWingReport, August 28, 2021
ISIS-K has proved resilient despite intense efforts by the Taliban, forces of the previous Afghan government and the US-led coalition to destroy it.
Tim Lister, CNN, August 27, 2021

Mainstream awareness of ISIS-K rose significantly after attacks during the withdrawal of US forces from Afghanistan in August 2021.

ISIS-K, the Islamic State's affiliate in Afghanistan, claimed responsibility for that attack, the deadliest for the U.S. military since 2011. https://t.co/4nOnpTap8h

Biden has told the Pentagon to develop plans to strike ISIS-K assets.

BREAKING: The US military has carried out a drone strike killing an ISIS-K planner in eastern Afghanistan.

This is not meant to be a formal definition of ISIS-K like most terms we define on Dictionary.com, but is rather an informal word summary that hopefully touches upon the key aspects of the meaning and usage of ISIS-K that will help our users expand their word mastery.