FISA stands for the Foreign Intelligence Surveillance Act of 1978. This act restricts the circumstances of when a United States government agency can perform warrantless surveillance.

FISA is intended to give the U.S. government methods to investigate terrorism while preventing the illegal invasion of privacy of U.S. citizens. All documentation surrounding investigations done while obeying FISA are strictly confidential. However, controversy often arises when these documents are declassified and released to the public.

A modern event that involved FISA had to do with the FBI’s investigation of a connection between the staff of President Donald Trump and Russian interference in the 2016 presidential election. Trump and other Republicans argued that the FBI had abused its power and had made errors that supposedly violated FISA.

Where does FISA come from? 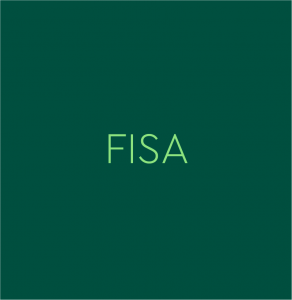 Congress passed the Foreign Intelligence Surveillance Act in 1978, which was signed into law by President Jimmy Carter. The act was the result of several high profile instances in the 1970s where the U.S. government conducted surveillance of U.S. citizens without warrants. During the Watergate scandal, in particular, it was discovered the government was conducting warrantless surveillance on numerous U.S. citizens, including Dr. Martin Luther King Jr.

To begin, FISA establishes a special federal court known as the United States Foreign Intelligence Court (FSIC) that must approve requests for warrantless surveillance by the government. All of the proceedings of the FSIC are classified and not available to the public unless documentation is declassified by the FSIC.

In brief, the FISA was first concerned with warrantless electronic surveillance. According to FISA, the government is only allowed to perform this kind of surveillance on “foreign powers” or “agents of foreign powers” and only if they have probable cause to believe the person or their activity is a threat to the United States.

FISA would be amended over the years to widen the warrantless surveillance to include phone and email surveillance, searches of a person or their property, and records of a business to acquire foreign intelligence information.

FISA is much more strict about the conditions under which the government may perform any of these activities on U.S. citizens. In particular, the physical searches and business records sections are almost entirely forbidden unless they can somehow be conducted without violating the Fourth Amendment of the Constitution.

Since it was passed, FISA has mostly been described as an act that outlines some of the tools the United States can use to fight terrorism. This has especially been true after the events of September 11, 2001 when terrorism suddenly became a focus of American policy. The passing of the PATRIOT Act in 2001 loosened the restrictions placed on the government by FISA, explaining that the government only needed to prove that their warrantless surveillance “mostly” had to do with investigating terrorism rather than that being the sole reason.

Remember the FISA debate when the far-right was all about "I've got nothing to hide, so who cares?" Awesome. (re: TSA screening)
@bobcesca_go, November 22, 2010
Jordan, who has been a fierce defender of the President and critic of the FISA process, said that the measure "represents real reform" of the FISA process.
Jeremy Herb and Manu Raju, CNN, March 10, 2020

FISA has been controversial, as is often the case with secretive government processes. In recent times, FISA has been at the center of investigations by the FBI on President Donald Trump’s possible connection to Russia.

Intelligence officials “have inadvertently made false representations” during Congressional hearings and to the FISA court, Rice says

On Wednesday, NSA released a new SIGINT Annex. The SIGINT Annex is a very technical but also very important document, last substantively revised in the 1980s, that basically governs signals intelligence activity outside the scope of FISA, under Executive Order 12333. 1/10

This is not meant to be a formal definition of FISA like most terms we define on Dictionary.com, but is rather an informal word summary that hopefully touches upon the key aspects of the meaning and usage of FISA that will help our users expand their word mastery.