What does lying flat mean?

Lying flat is a translation of the Chinese phrase tang ping, a Chinese social movement and lifestyle whose followers adopt a more leisurely and nonmaterialistic life in rejection of professional demands and societal expectations.

In particular, those who participate in the movement often drop out of the high-pressure and highly competitive professional environment to work only as much as they need to support their minimalist lifestyle. In addition, many also avoid traditional societal expectations, such as getting married and having children.

Members of the movement are primarily Chinese young people and millennials who object to the demands (and unsatisfying rewards) of professional life, particularly long working hours. (A six-day, 72-hour workweek with a schedule of 9 a.m. to 9 p.m. each day is so common in some industries that it’s often referred to with the slang term 996).

Lying flat is often seen as a counterculture movement and is actively suppressed by the Chinese government, which heavily censors content about it on the Chinese internet.

The lying flat movement is sometimes noted for its parallels to the antiwork movement centered in the U.S., whose members aspire to stop working or work as little as possible, often as part of a rejection of the exploitation they believe is inherent in capitalist and industrial systems.

As awareness of both movements grew in 2021 and early 2022, both came to be frequently discussed in relation to the Great Resignation, the widespread trend of workers quitting their jobs during the COVID-19 pandemic. The trend is thought to be the result of many different factors, notably workers’ dissatisfaction with current working conditions and personal reassessments of career and lifestyle due to the changes and hardships of the pandemic. However, in many cases, many of those resigning were in fact moving on to new jobs. In contrast, many members of the antiwork and lying flat movements aspire to leave the workforce altogether.

Where does lying flat (tang ping) come from? 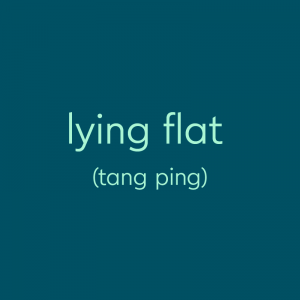 The lying flat movement was popularized by Luo Huazhong, who in April 2021 wrote a blog post about the new laid-back lifestyle he had adopted since quitting his job as a factory worker. The title of the blog post translated to “Lying Flat is Justice” and featured a photo of him literally lying flat on his back.

He wrote about his plan to live off of savings while relaxing in his home and living a less materialistic life. Before the post was removed by the Chinese government, it went viral in China, inspiring others to join the movement as an anti-consumerist pushback against the hypercompetitive and high-pressured work culture, as well as other societal expectations.

antiwork/lying flat is the beginnings of post-capitalist enlightenment.
@solarpunk2050, January 7, 2022
Talk of "lying flat" has spread rapidly through China as young people contend with intense competition for the most attractive jobs, especially in tech and other white collar fields.
Sophie Jeong, CNN Business, August 28, 2021

Members of the lying flat movement are primarily Chinese young people. The movement is often discussed in the context of similar ideologies and wider trends involving worker dissatisfaction.

The great resignation is the pandemic-induced, American version of China's lying flat.

Great piece on the "antiwork" trend in the US, which doesn't feel too dissimilar to young Chinese people stepping off the hamster wheel and "lying flat" https://t.co/L8yNybP8Nv

““Lying flat” is a “resistance movement” to a “cycle of horror” from high-pressure schools to jobs with seemingly endless work hours.”