What does antiwork mean?

The term antiwork is used in reference to a movement or ideology whose members aspire to stop working or work as little as possible—and encourage others to do the same. For some, the foundation of this ideology involves the belief that paid labor as it currently exists in capitalist and industrial systems should be abolished entirely due to being inherently exploitative.

Antiwork is also used as the name of the subreddit r/antiwork (a subforum of the website Reddit), which popularized the term. Antiwork ideology is closely associated with the forum.

Perspectives and beliefs vary among users of the forum and people who identify as members of the movement. Many aspire to reduce their participation in paid labor as much as possible. Some also advocate for its complete abolishment as part of a radical restructuring of society. Many principles grouped under the term antiwork are based on, are part of, or overlap with Marxist philosophy and communist and anticapitalist views. Still, more moderate members advocate not for no work at all but rather for less work and better working conditions and wages.

Some of the core beliefs of antiwork ideology shared among many members are that work and working conditions are frequently exploitative and actively degrade the dignity and wellbeing of workers; that a person’s value is not (and should not be) based on their work or productivity in the context of work; that employment dynamics are inherently inequitable; and that much work is meaningless.

The antiwork movement is sometimes noted for its parallels to the movement among Chinese young people known as lying flat (or tang ping), which involves working less as a rejection of the demands of professional life and consumerist culture.

As awareness of and participation in the antiwork forum and movement grew in 2021 and early 2022, it came to be frequently discussed in relation to the Great Resignation, the widespread trend of workers quitting their jobs during the COVID-19 pandemic. The trend is thought to be the result of many different factors, notably workers’ dissatisfaction with current working conditions and personal reassessments of career and lifestyle due to the changes and hardships of the pandemic. However, in many cases, many of those resigning were in fact moving on to new jobs. In contrast, many members of the antiwork movement aspire to leave the workforce altogether.

Some members of r/antiwork use the term Idlers to refer to themselves.

In terms of grammatical usage, the term antiwork is typically used as a modifier in phrases like antiwork movement or antiwork ideology, as opposed to being used like a noun in the way that anticapitalism is. It’s also sometimes used as an adjective to describe a person’s views, as in I’m antiwork.

Where does antiwork come from? 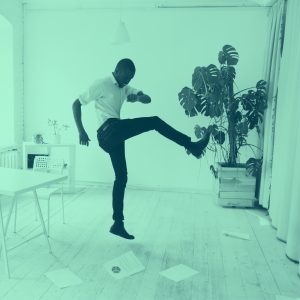 In antiwork, the word work is used in its sense meaning “employment, as in some form of industry, especially as a means of earning one’s livelihood.” In other words, it refers to the formal arrangement of paid labor, as opposed to simply any task, endeavor, or form of effort. The prefix anti- indicates opposition and has a history of use in the context of ideologies and movements, such as in anticapitalism and antiestablishment.

The origins of the name antiwork and the principles associated with it can be traced to the subreddit r/antiwork, which was created in 2013. Early content centered around far-left political ideology, specifically Marxist and anarchist ideas about not working as a form or resistance to capitalism.

Popularity and awareness of the forum increased rapidly during 2020 and 2021, during the time of the COVID-19 pandemic. The growth of the subreddit caused a much larger awareness of the concept of antiwork that continued into 2022.

As the popularity of the forum grew, it began to feature more posts about people quitting their jobs due to poor working conditions and mistreatment by employers and managers.

The antiwork movement and forum also gained attention due to media reports on its members’ support of strikes and related actions, such as a campaign to flood the recruitment website of the food company Kellogg’s with fake job applications in a show of solidarity with its striking workers.

I quit my job today because I realized if I'm going to work until I die it might as well be for myself.  #antiwork #thegreatresignation
@3BearsGayming, October 25, 2021
The stories of those in the antiwork movement provide some answers to why there's an ongoing labor shortage. Whether bosses realize it or not, workers are effectively striking for better conditions — and it might just work.
Juliana Kaplan and Andy Kiersz, Business Insider, November 25, 2021

The term antiwork and the movement it refers to are closely associated with the subreddit r/antiwork, which popularized the term. The antiwork movement and ideology are often discussed in the context of larger trends about worker dissatisfaction and critiques of capitalism.

I thought my outlook on the world was already cynical & bleak until I joined r/antiwork. Get me off this mortal coil.

This is not meant to be a formal definition of antiwork like most terms we define on Dictionary.com, but is rather an informal word summary that hopefully touches upon the key aspects of the meaning and usage of antiwork that will help our users expand their word mastery.