Everything After Z by Dictionary.com
Previous Word sleeper cell
Next Word Supremacy Clause

What does suffragette mean?

A suffragette refers to a woman who advocates for women’s right to vote in public political elections. This term especially applies to women in the late 19th and early 20th centuries in the US and UK.

“The change is slow and the wait long. But for Saudi suffragettes, even a vote in local elections is a step to celebrate.”
Lyse Doucet, BBC, November, 2015
“The daughter places a 'Thank You' sign at the gravesite of the suffragette, who endured opposition and abuse throughout her life, but eventually helped all women gain the right to vote.”
Marian Hetherly, WBFO, May, 2017
“[T]hough today we're aware of both the great things that suffragettes achieved and the many problematic things they did (such as engage in racist rhetoric and actions, like making women of color march separately or not at all), we don't necessarily have much understanding of how they were received by the culture at the time.”
J.R. Thorpe, Bustle, May, 2017
SEE MORE EXAMPLES

Where does suffragette come from? 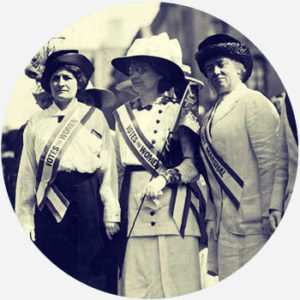 The right to vote, historically afforded only to certain men, is known as suffrage. In 1906, the term suffragette was coined using the French feminine suffix -ette, to describe a woman who supported women’s suffrage, first used, notably, by British journalist Charles Hands in the Daily Mail to deride members of the Women’s Social and Political Union (WSPU).

Early on, suffragette was often used to denote a more extreme form of the suffragist, a term for an advocate of political franchise, especially for women, dating back to at least the 1820s. Whereas suffragists were simply asking for the right to vote, suffragettes were militant, as the WSPU were known to be. Some British women’s suffrage groups reclaimed the label suffragette, although others, especially in the United States, preferred to keep the older suffragist.

The British and American women’s suffrage movements, while separate, were still closely intertwined. In the United Kingdom, a bill for women’s suffrage was put before Parliament in 1870. When it was eventually defeated in 1897, the National Union of Women’s Suffrage Societies was formed. Its purpose was to campaign to extend the right to vote for women under the same terms as it existed for men. Led by wealthy widow Millicent Garrett Fawcett, it advocated a peaceful approach, including letter-writing campaigns.

In 1903, though, British activist Emmeline Pankhurst formed the WPSU, which urged civil disobedience. In 1908, for instance, the organization attempted to invade the British House of Commons. These tactics often led to arrests. Hunger strikes in prison were one common tactic to protest.

In 1918, after many years of campaigning, some women were finally granted the right to vote in the UK. This was a quite limited act, however. Only men and women over the age of 30 years were enfranchised under certain conditions (men had to have been able to vote previously in local elections and women had to be property owners or married to men who were members of particular local bodies, among other stipulations). It wasn’t until 10 years later with the 1928 Equal Franchise act that all women over 21 were permitted to vote in the UK.

Across the Atlantic, a similar movement was brewing. The 1848 Seneca Falls Convention brought together many advocates who believe that women should have the right to vote. However, a few years later, the American Civil War disrupted the movement.

When the 15th Amendment, which would guarantee black men the right to vote, was proposed, some suffragists refused to support it, sometimes even appealing to racist white men to gain support for white women’s suffrage. In 1890, the National American Woman Suffrage Association was formed to campaign for women’s right to vote, with Elizabeth Cady Stanton as its first president. They argued that women would create a better world with the right to vote through traditionally female and domestic virtues, a line of reasoning that appealed to many different political agendas.

In 1910, American Alice Paul visited Birmingham, England, and was influenced by the suffragette movement there. When she returned home, she formed the National Women’s Party, which helped import civil disobedience techniques she’d learned while in England to the US. This same year, a few states began to give women the vote, but state-by-state enfranchisement was slow. Finally, after World War I, women were finally given the vote with the 19th Amendment’s ratification in 1920.

Suffragette has gone on to describe women who fought for the right to vote in modern history, such as in Saudi Arabia, where women were enfranchised, though only in municipal elections, for the first time in 2015.

This is not meant to be a formal definition of suffragette like most terms we define on Dictionary.com, but is rather an informal word summary that hopefully touches upon the key aspects of the meaning and usage of suffragette that will help our users expand their word mastery.