What does Three Percenter mean?

A Three Percenter is someone who advocates for a strict interpretation of the Second Amendment of the US constitution, strongly believing in armed rebellion against perceived government overreach, especially with respect to gun laws.

Where does Three Percenter come from? 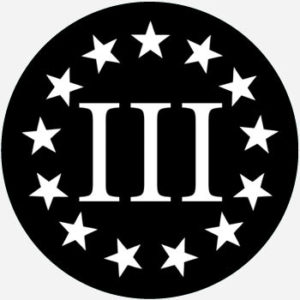 The Three Percenters are a national group that was loosely organized in 2008 by Mike Vanderboegh, the late militia leader and author of the controversial novel, Absolved. Their central ideology is a strict reading of the Second Amendment’s clauses of a ” well-regulated militia” and “right of the people to keep and bear arms,” feeling these protections permit armed insurrection in the face of governmental power grabs.

The name Three Percenters is based on a false theory that, during the American Revolution, only 2.96% of the US population actually served in George Washington’s army. Historians have estimated the percentage was closer to 15–25%, but Three Percenters are persistent in citing the debunked statistic as evidence of the US federal government as tyrannical from the start.

Since their founding in 2008, the Three Percenters have been aggressively opposed to (and armed against) any potential gun-control laws, along with other areas where they believe the federal government—particularly under their then-frequent target, Barack Obama—is becoming too large and powerful. For instance, Vanderboegh was recorded arguing for armed resistance against the 2009 Affordable Care Act, rallying fellow Three Percenters to “break windows” at the offices of the Democratic National Committee. Despite Vanderboegh’s cry, the group’s official website states that they do not condone violence and prohibits members from committing “first use of force.”

During the 2016 US presidential election, the Three Percenters became increasingly visible at political rallies, protests, and armed standoffs, usually aligning with far-right policies and political candidates. The group has faced broad criticism from both liberals and conservatives, decrying the group as racist, prejudiced, and violent. The Anti-Defamation League has indeed labelled them an extremist organization.

In 2018, they claimed over 150,000 followers and have individual chapters in nearly every US state. They are often included as part of a broader small-government, militia-based movement especially in the rural US known as the Patriot movement.

III%er caught in FBI sting bomb plot
@ara_losangeles, September, 2017
You know you live in an interesting place when you see bumper stickers for 3 percenters on vehicles.
@Minervasbard, March, 2018
There are more than 10,000 Three Percenters—heavily armed Second Amendment supporters who believe their right to own firearms is under attack—scattered across the country.
Vice, October, 2017
SEE MORE EXAMPLES

While the Three Percenters are a national organization, not every person who describes themselves as a Three Percenter is necessarily an official member. The label Three Percenter can more generally signify someone who believes in broad gun rights and small government, all as potentially defended from a government tyranny through armed rebellion.

People identify as Three Percenters in speech, writing, and social media, where forms of the term variously appear in screen names and hashtags. They often use the Roman numeral III as their symbol, combined with a circular star formation representing the original thirteen states, and so often style themselves as III%ers, 3%ers, 3 percenters, or threepers for short.

The Three Percenters are not to be confused with 3%, a popular 2016 dystopian Netflix series.

This is not meant to be a formal definition of Three Percenter like most terms we define on Dictionary.com, but is rather an informal word summary that hopefully touches upon the key aspects of the meaning and usage of Three Percenter that will help our users expand their word mastery.