What is the Thin Blue Line?

The phrase Thin Blue Line represents the idea that law enforcement (associated with blue uniforms) acts as the barrier (or “line”) between the community they protect and lawlessness.

Where does Thin Blue Line come from? 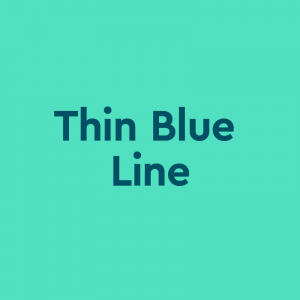 The phrase Thin Blue Line is old, and its exact source is unknown. It seems to have been inspired by a British regiment, called the Thin Blue Line, that stood against Russian cavalry charges during the Crimean War of 1854. The 1911 poem “The Thin Blue Line” by Nels Dickmann Anderson uses the phrase to refer to American soldiers (who wore blue) fighting against the British.

New York police commissioner Richard Enright may have been the first to use Thin Blue Line to refer to police in 1922 as he responded to criticism of his leadership. The phrase would catch on with police officers and politicians—and also the media. A 1950s community television program used the name Thin Blue Line to communicate information from police to the public. In the 1990s, Rowan Atkinson starred in The Thin Blue Line, a British police comedy series.

The symbol of the Thin Blue Line (a black square with a blue line running horizontally across the middle) dates back to the 1950s. However, the flag now commonly associated with the phrase Thin Blue Line was created in 2014 by college student Andrew Jacob. Jacob says that “patches and stickers” of the image of the Thin Blue Line at a Black Lives Matter protest inspired him to create a flag of this image. However, he has stated he did not create the flag as a reaction to the Black Lives Matter anti-police violence movement per se.

Over the next several years, pro-police counterprotestors and extremist groups would use Jacob’s Thin Blue Line flags at rallies and demonstrations. In 2017, for example, white supremacists and neo-Nazis waved Thin Blue Line flags at the Unite the Right rally in Charlottesville, Virginia. Jacobs and his company Thin Blue Line USA fiercely denounced the use of their flag at the rally and said “We reject, in the strongest possible terms, any association of our flag with racism, hatred, and bigotry.”

Yes, I will look at you differently if you have a thin blue line flag on your property or your person.
@inspireprag, September 3, 2020
A rally was held in Chardon Friday evening in support of law enforcement and in response to the recent ban of the "thin blue line" American flag after Chardon High School football players waived one on the football field last week.
Camryn Justice, ABC News 5 Cleveland, September 4, 2020

The Thin Blue Line is used to refer to police officers generally and the Thin Blue Line flag. The flag has become controversial over the years, especially as it’s borne by far-right groups such the Proud Boys and Patriot Prayer as it’s perceived to politicize the role of law enforcement and the symbolism of the American flag.

If you’ve ever wanted to see what the Thin Blue Line looks like… pic.twitter.com/m23owl6TDQ

This is not meant to be a formal definition of Thin Blue Line like most terms we define on Dictionary.com, but is rather an informal word summary that hopefully touches upon the key aspects of the meaning and usage of Thin Blue Line that will help our users expand their word mastery.