What is a Blue Alert?

A Blue Alert is a statewide alert sent after a police officer is killed, seriously injured, or missing after an interaction with a suspect who is on the run.

It is up to the individual American states to create a Blue Alert system. Florida was the first to do so in 2008, and in 2015 President Obama signed an act that required the Department of Justice to assist the states in developing Blue Alert systems.

In the military and civilian defense, a blue alert is “an alert following the first, or yellow, alert, in which air attack seems probable.”

Where does Blue Alert come from? 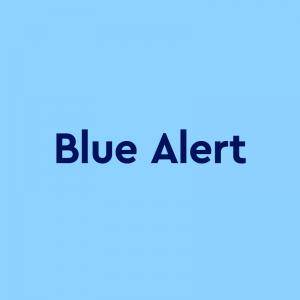 The term Blue Alert comes from the Blue Alert network created in Texas on August 18, 2008. This system was based on one created earlier in the year by Florida, which was known as a Law Enforcement Officer Alert or LEO Alert at the time. The blue in Texas’s Blue Alert more than likely comes from the color blue being popularly associated with and worn by American law enforcement.

Based on the older AMBER Alerts for abducted children and Silver Alerts for missing senior citizens, the Blue Alert was designed to assist in catching dangerous, violent suspects. Like those older alerts, it typically involves freeway signs alerting drivers to a description of a suspect or their vehicle. Citizens in the nearby area (or the whole state) get a Blue Alert notification on their phones.

According to the Department of Justice, 35 states have Blue Alert systems with legislation for a Blue Alert system also pending in the states of New York, Pennsylvania, Iowa, and New Hampshire as of 2020.

The Department of Justice gives specific guidelines on when a Blue Alert may be issued and what it should contain on its website. A Blue Alert can be issued under any of three circumstances:

Texas state trooper shot and killed in Freestone County; Blue Alert issued for a gray 2012 Chevrolet Malibu with Texas license plate JDN-4273. Call 911 if seen.
@BNONews, November 23, 2017
Residents across the Valley were surprised to see a "Blue Alert" on their phones Thursday, with many left wondering what the notification was in reference to.
Staff, ABC 15 Arizona, September 17, 2020

Thankfully, Blue Alerts are not commonly issued. They are rare enough that people often have to search the definition of a Blue Alert after getting one on a phone.

Did you receive a Blue Alert on your phone yesterday? Here's what that means. https://t.co/Frlx3B3ljm

The Blue Alert you may have received on your phone was sent from the North Dakota Emergency Notification System. The Bismarck Police Dept. issued an alert concerning an assault against an officer.

If you just got a “Blue Alert Warning” it’s bc someone just killed a law enforcement official and they’re on the loose in your area. Stay safe cuz they only realease these when the person is a huge threat to public safety. pic.twitter.com/9PJu0VUAEv

This is not meant to be a formal definition of Blue Alert like most terms we define on Dictionary.com, but is rather an informal word summary that hopefully touches upon the key aspects of the meaning and usage of Blue Alert that will help our users expand their word mastery.