187 is slang for “murder.” 187 is a term associated with hip-hop songs dealing with topics of crime or gang violence. 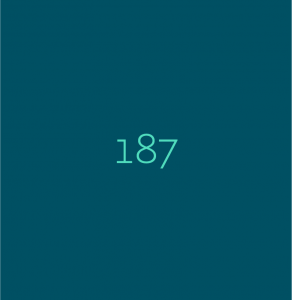 The slang use of 187 is a reference to Penal Code 187 in the law code of the state of California. Penal Code 187 defines and outlaws the act of murder.

Although the exact coiner is unknown, one of the earliest uses of the slang 187 was found in the 1992 song “Deep Cover” by Dr. Dre featuring Snoop Dogg. In the song, Snoop Dogg raps about the murder of undercover police: “Yeah, and you don’t stop / ‘Cause it’s 1-8-7 on an undercover cop.”

Both Dr. Dre and Snoop Dogg grew up in California, where they apparently encountered reference to California Penal Code 187.

187 spread throughout the hip-hop community as a slang term for murder. It has been notably used by New York rapper 50 Cent and New Orleans rapper Lil Wayne. For example, in his 2013 song “Rich as Fuck,” Lil Wayne sings “Yeah, murder, 187 / I be killing them bitches, I hope all dogs go to heaven.”

Just cause you see my tweets dot think I won't pull a 187 on yo ass 😎
@Scarface_TMC, November 12, 2015
His former girlfriend referred to him affectionately on the site as “Mr. 187” — a slang term for murder derived from California’s penal code.
Ashley Southall and Edgar Sandoval, The New York Times, April 21, 2019

Today, 187 is a term most familiar to fans of rap music and hip-hop.

I'm praying for dmx because snoop bout to do a 187.

If this bird outside my window don't stfu imma have to pull out my glocc and 187 dat ass.

187 is often used as a noun or a verb to refer to an act of murder, especially with a gun.

This is not meant to be a formal definition of 187 like most terms we define on Dictionary.com, but is rather an informal word summary that hopefully touches upon the key aspects of the meaning and usage of 187 that will help our users expand their word mastery.