What does fo shizzle my nizzle mean?

Fo shizzle my nizzle is a slang way to say “for sure, my friend.” It was popularized as a catchphrase of the rapper Snoop Dogg and is meant as a playful way to express affirmation.

bet, Drop it like it’s hot, okurrr, esskeetit, another one

Where does fo shizzle my nizzle come from? 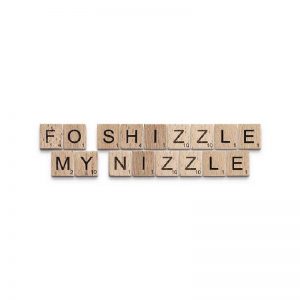 The phrase fo shizzle my nizzle is a slang expression based on for sure, my nigga and is associated with hip-hop music. Please see our usage note regarding nigga. For sure is an idiom meaning “certainly, surely.”

The practice of substituting -izzle for the end of words was popularized by Northern California rappers in the 1990s. Rapper E-40, nicknamed “The King of Slang,” is often credited with starting the -izzle suffix. During performances of his 1996 song “Rapper’s Ball,” he would use fo’ shizzle interchangeably with the phrase fo’ sheezy, with the dropped R in for a feature of Black English.

E-40 has said that his usage of -izzle was inspired by musician Frankie Smith’s 1981 song, “Double Dutch Bus.” In the song, Smith includes a section where children play a kind of Double Dutch or Pig Latin language game and insert an -izz infix into words. This -izzle appears to draw on an earlier –iz infix evidenced in the 1970s as way to confuse law enforcement.

While the -izzle emerged in Northern California, it was popularized by a resident to the south. Rapper Snoop Dogg, frequently mistaken as the true inventor of the -izzle suffix, first used forms of his phrase fo shizzle my nizzle in his 2000 single, “Snoop Dogg (What’s My Name Pt. 2).” Snoop Dogg would continue to use this phrase and the -izzle suffix so frequently that his 2002 MTV sketch comedy show was named Doggy Fizzle Televizzle.

Other rappers like Jay-Z and Pitbull took up fo’ shizzle my nizzle in the 2000s, as did many a white teen from Des Moines in their misbegotten efforts to be cool, though largely as a nod to all things Snoop Dogg, who has made fo’ shizzle my nizzle his brand. Shizzle, though, has gone on as a euphemism for “shit” and especially “the shit,” or something that is very good.

Examples of fo shizzle my nizzle

Who uses fo shizzle my nizzle?

The phrase fo’ shizzle my nizzle peaked in the early 2000s, though the Doggfather himself still makes plenty use of fo’ shizzle. My nizzle appears far less frequently, presumably to prevent Snoop’s agent from going crazy. And, Tyler Branson from Des Moines, please don’t going saying my nizzle. Because the N-word.

For shizzle @marthastewart @tmobile! Come find me, I got brownies! #BagOfUnlimited pic.twitter.com/rCyNykrfrI

*Snoop Dogg as a meteorologist

I had a dream that Snoop Dog was my college advisor and the only college advice he gave me was "fo shizzle my nizzle."

How was my morning? Fo shizzle my nizzle! Snoop Dogg is in Augusta throwing a Masters… https://t.co/DIewwBtL7d pic.twitter.com/Uvqy58RJoF

Other users drop a fo shizzle my nizzle in Snoop Dogg’s original sense: to affirm something enthusiastically or characterize something as excellent.

Willstock was off the hizzle. And that's fo shizzle, my nizzle.