What does Proud Boys mean?

The Proud Boys are a right-wing, men-only, U.S.-based extremist group known for nationalistic, misogynistic, and transphobic views and violent clashes with left-wing activists.

Despite their disavowals, members of the Proud Boys have been regularly involved in inciting violence and promoting racism. Members of or people associated with the group have been convicted of violent crimes.

Where does Proud Boys come from? 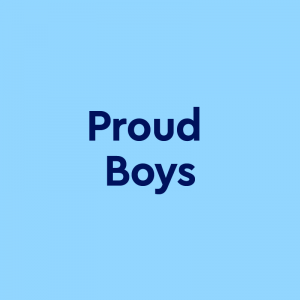 The Proud Boys were formed in 2016 by Gavin McInnes, a far-right political commentator and co-founder of Vice. According to McInnes, the Proud Boys take their name from the 1992 song “Proud of Your Boy,” originally written for the Disney movie Aladdin.

McInnes has adamantly denied the Proud Boys are an extremist group, describing the group instead as “a men’s club that meets about once a month to drink beer” formed out of a disgust of political correctness that, while not instigating fights, “will finish them.” McInnes, who has himself acknowledged may be sexist and Islamophobic, also maintains that the Proud Boys oppose racism, anti-Semitism, and the alt-right.

Despite McInnes’s claims, the Proud Boys have been repeatedly accused of inciting violence and promoting racist views. The group describes themselves as “Western chauvinists.” Women and transgender men are not allowed in the group.

The Southern Poverty Law Center (SPLC) has officially designated the Proud Boys as a hate group, adding that “their disavowals of bigotry are belied by their actions.”

The Proud Boys often hold rallies (to which some members show up armed) and actively oppose the generally left-wing movements of Antifa and Black Lives Matter—including a violent clash in Portland, Oregon, in August 2020 that made national and international headlines.

The Proud Boys have been banned from major social media platforms. They are known for wearing black and yellow polo shirts.

Interest in Proud Boys spiked on September 29, 2020 during the first presidential debate of the 2020 presidential election. When asked by moderator Chris Wallace if President Donald Trump condemned white supremacist groups (and after Democratic candidate Joe Biden interjected by naming the Proud Boys), Trump responded by telling the Proud Boys to “stand back and stand by,” which alarmed many observers as a call to arms—and which galvanized members of the Proud Boys. When pressed on his comment the following day, Trump claimed not to know the group and said they should stand down.

Every time proud boys show up in Seattle, they are violent. Stay safe out there everyone.
@DevNullSA, May 1, 2018
As Mr. Hare charged, one protester threw a plastic bottle that sailed past him, the video showed. Within moments, videos showed, a crowd of Proud Boys surrounded the protesters and began punching and kicking them.
Colin Moynihan, New York Times, October 2019

The Proud Boys are frequently discussed in the specific context of violent clashes at political protests and rallies as well as in the broader context of the rise of alt-right, neofascist groups in the U.S. and around the world. They are also widely condemned as a dangerous hate/domestic terrorist group.

Armed white men in Kenosha. Police do nothing.

Armed white "proud boys" in Portland deliberately there to cause chaos. Police do nothing.

are all ignored by #AGBarr, who rails against #BLM.

Members of the Proud Boys often attend the same events and rallies as Patriot Prayer, another far-right political group in the Pacific Northwest.

This is not meant to be a formal definition of Proud Boys like most terms we define on Dictionary.com, but is rather an informal word summary that hopefully touches upon the key aspects of the meaning and usage of Proud Boys that will help our users expand their word mastery.