Boogaloo refers to a loosely organized extremist movement that supports a second American Civil War, which they also refer to as a boogaloo. Adherents of the movement, known as the Boogaloo Boys or Bois, hold far-right, pro-gun, violently antigovernment, and in many cases racist beliefs.

Where does boogaloo come from? 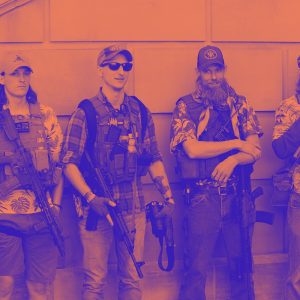 Although its origins are unclear, boogaloo originally referred to a rock-and-roll dance and music style especially popular among Latin American youth in New York City in the 1960s.

By the 2000s, jokes about Breakin’ 2 extended boogaloo as a slang term for any nonsensical, unnecessary, or strange sequel, literal or figurative. And so the boogaloo movement applied the word boogaloo for a “sequel” to the American Civil War.

According to the Southern Poverty Law Center, researchers have traced the term boogaloo, in reference to the insurrectionary subculture, back to the website 4chan as early as 2012. The term boogaloo was used on 4chan’s /k/ and /pol/ boards, which—despite being ostensibly dedicated to discussions of weapons and politics, respectively—are often used by white supremacists and other extremist groups to share racist content.

On these 4chan boards, the word boogaloo became especially used in often racist and violent memes or threads about the idea of a second civil war or engaging in violence against the police. Supporters of such a war promoted violence to incite this war, which many felt would be a violent race war.

By the late 2010s, the boogaloo internet subculture spread from 4chan to other online communities such as on Reddit and Facebook.

The political ideologies of boogaloo adherents vary. Some describe themselves as libertarians, others anarchists; yet others are connected with white nationalist, neo-Nazi, fascist groups. Regardless of specific beliefs, members of the boogaloo movement support violent insurrection against the federal government and, often, left-wing groups. They generally believe in accelerating what they believe is inevitable civil war or violent uprising that will lead to the destruction of society.

To this end, boogaloo members promote violence that will hasten an outbreak of civil war—and some have been charged with killing police officers, planning terrorism, and committing other destructive or violent crimes. Some boogaloo members specifically advocate for racial violence, thinking a race war would collapse the federal government to usher in a fascist state.

In demonstrations, boogaloo bois/boys show up heavily armed, often wearing Hawaiian shirts and decorative patches of igloos—both apparently because boogaloo sounds like “Big Luau” or “Big Igloo.” The phrase the Big Luau is also used by some boogaloo members as code for societal collapse or murdering police officers, because, darkly, pigs (slang for “cops”) are cooked at a luau. Another boogaloo variant is boojahideen, playing on mujahideen, “Muslim guerrilla fighters, especially in Afghanistan and Iran.”

Boogaloo has no known leadership or central organization, with self-declared members organizing on social media to do everything from sharing memes to planning violent activities.

Awareness of the boogaloo movement has grown in recent weeks because of the surreal appearance of its members and its quizzical moniker, coupled with the movement’s professed desire to incite high-impact violence on American soil.
Nathan Taylor Pemberton, The New York Times, June 29, 2020
Sometimes I try to imagine how I’d explain to a normal person why armed men called Boogaloo Boys wear Hawaiian shirts while heavily armed, and how likely it is the normie might literally think I’m a delusional schizophrenic while spinning the whole wild-eyed story
@tomgara, June 30, 2020

Within the loose movement, Boogaloo is often capitalized and used itself as a kind of codeword for violent, often racist uprising against the government and police. Some adherents may use boog or the boog for short.

Members of boogaloo, again, participate in antigovernment protests or demonstrations, where they are popularly known for wielding large guns and wearing Hawaiian shirts. Boogaloo adherents often deny violent or racist motives in the demonstrations or claim various the movement is a joke.

The Southern Poverty Law Center warns activists to avoid boogaloo members because the group’s violent anti-government philosophy has attracted white supremacists and neo-Nazis. In June 2020, Facebook announced that it was removing Boogaloo groups on the site after federal officials alleged members of the group used Facebook to plan the murder of a federal agent.

Im in Richmond reporting on a pro-gun rally for @VICENews . The Boogaloo Bois have arrived pic.twitter.com/QwrMfOYkPp

This is not meant to be a formal definition of boogaloo like most terms we define on Dictionary.com, but is rather an informal word summary that hopefully touches upon the key aspects of the meaning and usage of boogaloo that will help our users expand their word mastery.