What does Boats 'N Hoes mean?

Boats ‘N Hoes is a salacious comedy rap song and video from the 2008 movie, Step Brothers, featuring puns about sailing and sex. The song is referenced in popular culture during parties and water-based vacations.

Where does Boats ‘N Hoes come from? 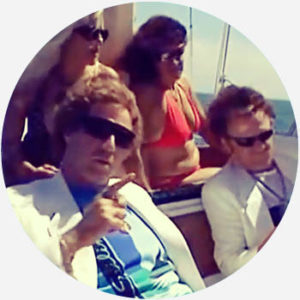 Comedians Will Ferrell and John C. Reilly teamed up with director Adam McKay for the popular 2008 comedy, Step Brothers. In the movie, Ferrell and Reilly play unemployed, middle-aged, music production-aspiring stepbrothers in need of direction in life. Under threat of being thrown out of their parents’ house, the two, improbably, start an entertainment company, inaugurating their venture with a music video for their song “Boats ‘N Hoes,” filmed on one of their father’s boats. Its hook goes: “Boats ‘n hoes, boats ‘n hoes / gotta have me my boats ‘n hoes.”

The video features the stepbrothers in various postures of hip-hop swagger aboard the boat. Dressed in nautical t-shirts, white suits, and gold chains, the characters spit naughty nautical rhymes as two middle-aged women (here, the hoes, or sexually available women) drink and dance in bikinis.

The ironic ridiculousness of the song, its quotable verses featuring cheesy sex and sailing puns (e.g., going port to port, among much more explicit lines), and its parody of rap video tropes helped make it a hit in popular culture, further boosted by the star power of Farrell and Reilly in the late 2000s. The film grossed over $100 million in the US alone.

Boats ‘N Hoes has inspired memes, GIFs, its own social-media pages and handles, and merchandise, such a t-shirts popular among Spring Break crowds. The song/video has also become a theme for birthday and bachelorette parties, with vendors on the likes of Etsy selling Boats ‘N Hoes paraphernalia.

The song and video Boats ‘N Hoes is mostly used as a pop-culture reference by fans of the film, especially viewers from late Generation X and younger. In reference to the song and video, the lower-cased boats ‘n hoes has become a colloquial way to express excitement and enjoyment, especially when vacationing or partying on a boat or body of water.

While many women do quote or allude to Boats ‘N Hoes, many others may consider the phrase’s ho, a slang term for a whore, vulgar and offensive.

The song is properly stylized Boats ‘N Hoes (with the contracted ‘n for and meant to evoke a slang-y, rap-y air), but some writers of the phrase may use boats and or & hoes.

This is not meant to be a formal definition of Boats ‘N Hoes like most terms we define on Dictionary.com, but is rather an informal word summary that hopefully touches upon the key aspects of the meaning and usage of Boats ‘N Hoes that will help our users expand their word mastery.