Bonnaroo is the popular short name for the Bonnaroo Music and Arts Festival, an annual event held in Manchester, Tennessee, that features dozens of concerts across multiple stages by popular artists from a variety of genres, including hip hop, rock, and pop.

The event is held on farmland that has been converted into festival grounds. Many festivalgoers camp during the event.

While Bonnaroo is primarily known as a concert festival, it also features food festivals, comedy performances, and film festivals.

Where does Bonnaroo come from? 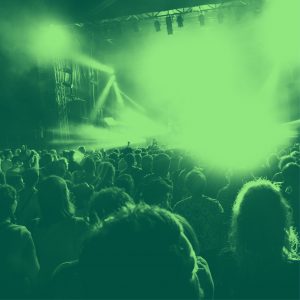 The first Bonnaroo festival was held in 2002. Its name is thought to be taken from the title of the 1974 album Desitively Bonnaroo by Dr. John (who performed multiple times at Bonnaroo). The word bonnaroo is a New Orleans slang term referring to a good time (perhaps literally meaning “the best on the streets”—a combination of the French terms bonne, meaning “good,” and rue, meaning “street”).

Bonnaroo is known for hosting performers from diverse genres and both mainstream and lesser-known artists. Notable acts from Bonnaroo’s history include Bruce Springsteen, Jay-Z, Pearl Jam, Radiohead, Kanye West, Florence and the Machine, My Morning Jacket, and Chance the Rapper.

I'm performing at #Bonnaroo right after Ye. So please everyone just #PrayThatChanceMeetsKanye
@ChanceTheRapper, June 10, 2014
One year I'm gonna take a RV to Bonnaroo for the weekend and stay in the camp grounds. I'll walk around and give out my blueberry muffins
@WakaFlocka, June 13, 2016
In terms of numbers, festivals on the scale of Bonnaroo and Coachella are major events: 80,000 to 90,000 people for a weekend (for Coachella, two weekends in a row). They are still rites of passage for college kids.
Jon Pareles, Ben Ratliff and Jon Caramanica, New York Times, March 18, 2016
SEE MORE EXAMPLES

More information and context on Bonnaroo

What are other words used in discussion of Bonnaroo?

This is not meant to be a formal definition of Bonnaroo like most terms we define on Dictionary.com, but is rather an informal word summary that hopefully touches upon the key aspects of the meaning and usage of Bonnaroo that will help our users expand their word mastery.