Coachella is the popular short name for the Coachella Valley Music and Arts Festival, an annual music festival held in Indio, California. The festival includes dozens of concerts across multiple stages by popular artists from a variety of genres, including hip hop, rock, and pop.

Coachella is one of the largest and most popular music festivals in the US. It’s known for attracting an extensive lineup of popular headliners and hundreds of thousands of concertgoers, including many celebrities.

Coachella is often considered the unofficial start of the music festival season in the US, with most major festivals happening in the spring and summer after Coachella.

Coachella typically begins on the second or third Friday in April and runs for two weekends. Coachella 2022 will be held the weekends of April 15-17 and April 22-24.

Where does Coachella come from? 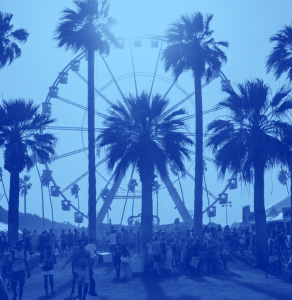 Coachella gets its name from the Coachella Valley, which is located in the Colorado Desert, where the festival takes place. The event was started in 1999 by the music promotion company Goldenvoice. For many years, it took place over a single weekend, but has since expanded to span two weekends (with many of the same artists performing on both weekends). The event was originally held in October but was moved to April in 2001.

I think the only reason I want to have kids is so that I could brag about seeing Beyonce live at Coachella.
@JohnnySibilly, April 6, 2021
Prince singing Creep by Radiohead at Coachella is top 10 things in life I missed.
@jakelloydii, September 23, 2020
Daft Punk, donning their signature robot outfits and spinning their euphoric hits, set up inside a 24-foot-tall aluminum pyramid covered with screens and dazzling LED lights. The duo debuted this show at an instantly legendary set at Coachella 2006, then brought it to festivals and arenas around the globe.
Jon Blistein, Rolling Stone, February 22, 2021
SEE MORE EXAMPLES

What are other words used in discussion of Coachella?

This is not meant to be a formal definition of Coachella like most terms we define on Dictionary.com, but is rather an informal word summary that hopefully touches upon the key aspects of the meaning and usage of Coachella that will help our users expand their word mastery.