Everything After Z by Dictionary.com
Previous Word BTS Persona Challeng...
Next Word bullshot

What does bubble tea or boba mean?

Bubble tea, also known as boba, is a Taiwanese drink of tea infused with milk or fruit and served over tapioca balls, called bubbles or boba.

‘Boba Tea Toast’ is the Newest Food Craze in Singapore
Ryan General, NextShark (headline), April, 2018
What I love the most about bubble tea is the tapioca.. But when they don't give me enough bubbles it makes me angry 😡
@elitttaaa, June, 2014
honestly little things make me so happy , surprise me with a slurpee ice cream or boba and you'll make me a happy person.
@carmelxoxo_, June, 2016
SEE MORE EXAMPLES

Where does bubble tea come from? 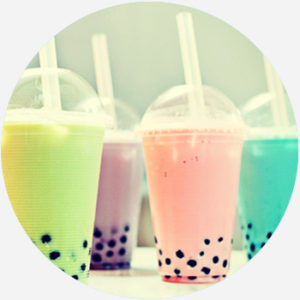 Bubble tea is usually said to have originated in Taiwan in the 1980s when a teahouse manager thought to put some tapioca balls—sweet, chewy globs usually made from the cassava—into some cold tea.

In Taiwan, bubble tea is natively called pearl milk tea in Chinese, with the tapioca balls likened to pearls. In English, these balls are called bubbles, sometimes rendered as boba in Chinese and with boba sometimes used in the US for the entire beverage.

The drink spread in Taiwan and Southeast Asia in the 1990s and made the jump to the US in the 2000s, first spreading in cities with Taiwanese populations like San Francisco and New York, thanks especially to entrepreneurs like Boba Guys.

While bubble tea is traditionally made with black or white tapioca balls, other popular types include clear, flavored, popping, and mini boba. The tea can be served hot or, more commonly, iced and made from various teas, including, black, green, white, and herbal blends. Essential to the drink is its wide straw for slurping every last little boba.

In 2012, a German study identified cancer-causing chemicals in tapioca balls, but subsequent research questioned the actual extent of the threat the chemicals posed. The balls themselves, though, are real choking hazards for children.

The health scare didn’t stop comedy music duo the Fung Brothers, who released a song honoring bubble tea and its place in Asian-American life in 2013, Bobalife.

Nor did it stop the brand Kung Fu Tea in 2018 from registering April 30th National Bubble Tea Day in the US.

Pictures of #boba or #bubbletea are particularly Instagram-able.

People have very strong feelings about bubble tea. Some find the texture of the tapioca balls disgusting. Many others, however, are obsessed with it—and boast the swag to prove it.

This is not meant to be a formal definition of bubble tea like most terms we define on Dictionary.com, but is rather an informal word summary that hopefully touches upon the key aspects of the meaning and usage of bubble tea that will help our users expand their word mastery.