What does butterfly effect mean?

The butterfly effect is the idea that small events can have a large, unpredictable influence on the future.

I wish I could see the butterfly effect played out in my life.. go back and change one thing to see how different my life would be today
@leannanicolexo, April, 2018
Another possible victim of the Cox "butterfly effect", whom Buckley failed to mention, was young tall Darcy Moore...In Reid's absence, Moore was swung forward and sustained a hamstring injury that will sideline him for up to four weeks.
Ben Collins, Australian Football League, April, 2018
Organizations can expect to feel the impact of tax reform differently, based on the industry they’re in, their legal structure, capital structure, geography, business objectives, and other details. Businesses will need to strategize around the untested tax code to decide where wins, losses, and opportunities may lie and model how the “butterfly effect” of change may impact their company.
Business Wire, April, 2018
SEE MORE EXAMPLES

Where does butterfly effect come from? 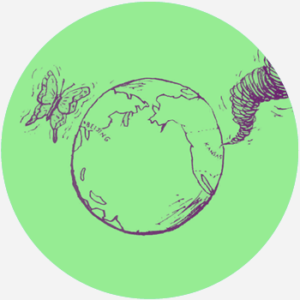 The idea behind the butterfly effect was proposed by Edward Lorenz, a meteorologist and mathematician, in the 1960s. Lorenz was working with computer models for predicting the weather when he found that small rounding differences in input numbers caused significant changes in the results. He proposed that small differences at the outset can make for large differences in the results, making longterm weather forecasting highly difficult if not impossible.

Lorenz described this proposal in a 1963 paper, “The Predictability of Hydrodynamic Flow.” Lorenz wrote in the paper that another meteorologist criticized the idea by arguing that if it were true, then a single flap of a sea gull’s wings could affect the weather. Lorenz memorably retorted that “the most recent evidence seems to favor the gulls.”

When Lorenz gave a talk on the subject in 1972 at a conference of the American Association for the Advancement of Science, fellow meteorologist Philip Merilees led a meteorology session and memorably called Lorenz’s talk Predictability; Does the Flap of a Butterfly’s Wings in Brazil Set Off a Tornado in Texas? Since Lorenz’s talk, locations and outcomes have varied but the butterfly and its wing flaps remain the same. Examples include a butterfly flapping its wings in Central Park causing rain in China or a butterfly flapping its wings in New York causing a hurricane in Japan. 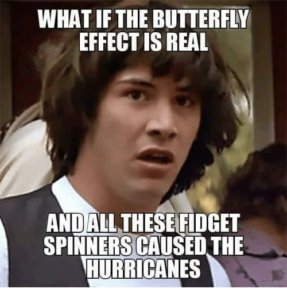 Lorenz’s insights influenced a new field of mathematics called chaos theory. Chaos theory deals with systems that are deterministic, not random, but still volatile, and has been applied to many fields, including biology and economics.

In the 1970–80s, butterfly effect spread to academia and then on to popular culture. Articles referencing the butterfly effect appeared in various scientific journals. In 1985, the concept was notably adopted in a self-help book, Tapping Your Secret Source of Power. After explaining the meteorological use of the butterfly effect, the author proposes that the small actions someone takes in the present can have a powerful impact on one’s future.

The concept of the butterfly effect has been applied not just to weather but also to business, economics, and even individual’s lives.

Outside of technical applications, the butterfly effect is sometimes referenced metaphorically to describe how seemingly small actions or events can have larger consequences on one’s life. Colloquially, people may cite the butterfly effect in speech and writing to help explain, justify, or simply characterize how something trivial got out of hand.

The butterfly effect has also been referenced numerous times in popular culture. Ray Bradbury’s 1952 short story “A Sound of Thunder” is often associated with the butterfly effect although it predates Lorenz’s work and Lorenz has said he was not aware of the story when he formulated his theory. In “A Sound of Thunder,” a time traveler inadvertently alters the present by stepping on a butterfly in the past. The story was parodied in a 1994 Simpsons episode.

A 2004 movie, The Butterfly Effect, explores a concept similar to Bradbury’s. The protagonist can change events in his past, but doing so has unpredictable consequences for the present. A sequel followed in 2006.

In 2015, the popular cartoon show The Amazing World of Gumball portrayed the butterfly effect in a more straightforward way, with the release of a butterfly causing chaos. Until Dawn, a video game released in 2015, utilized a game mechanic called the butterfly effect. A butterfly icon appears on the screen during events that lead to branching narratives. In 2017, hip-hop artist Travis Scott released a song, “Butterfly Effect,” where he reflects on the quality of his new life compared to the rough-and-tumble challenges of his old one.

This is not meant to be a formal definition of butterfly effect like most terms we define on Dictionary.com, but is rather an informal word summary that hopefully touches upon the key aspects of the meaning and usage of butterfly effect that will help our users expand their word mastery.