A comic-con is a convention (con, for short) focused on comic books and related forms of pop culture entertainment, including movies, TV shows, and video games.

The term comic-con is a general one and comic-cons are held in many locations, but the term often specifically refers to San Diego Comic-Con (officially known as Comic-Con International: San Diego), which is the most well-known event of its kind.

Other well-known comic-cons include those held annually in New York and Seattle.

In general, comic-cons often feature a variety of events, notably panels with entertainment industry professionals, including artists, writers, actors, and directors. Fans who attend comic-cons often participate in cosplay—dressing up as fictional characters.

Where does Comic-Con come from? 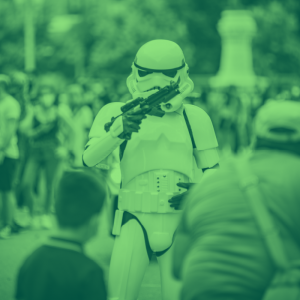 The first San Diego Comic-Con was held in 1970 and was called San Diego’s Golden State Comic-Con.

The con in comic-con is short for convention. Comic books, often simply called comics, got their name because early comic strips were primarily humor-based (superheroes and other genres became popular later).

Marvel Fans... I just saw a preview of what Marvel is showing at Comic-Con. You are about to get your mind blown! Best I've seen yet. Kaboom.
@MarkRuffalo, July 13, 2017
As always, I had SUCH an amazing time with everybody at comic-con!! Love y'all and I'm so grateful for all of the passion and excitement!
@jarpad, July 27, 2014
The problem: What goes over well at Comic-Con does not necessarily work in the real world, at least on the scale that Hollywood needs.
Brooks Barnes, New York Times, July 19, 2013
SEE MORE EXAMPLES

What are other words used in discussion of Comic-Con?

This is not meant to be a formal definition of Comic-Con like most terms we define on Dictionary.com, but is rather an informal word summary that hopefully touches upon the key aspects of the meaning and usage of Comic-Con that will help our users expand their word mastery.