What does digital dash mean?

In contemporary use, digital dash has come to serve as a stand-in for the expensive car itself.

Where does digital dash come from? 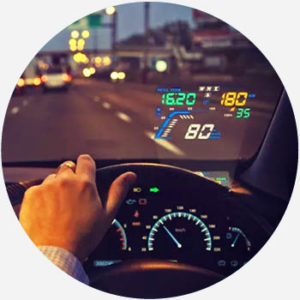 The first heads-up displays were prototyped for use by military pilots in World War II. Since the pilots needed to monitor their aircraft’s functions while scanning the skies for enemy planes and navigational landmarks, heads-up displays brought the instruments of the traditional cockpit onto the fore window.

From military planes in the 1930s to commercial planes in the 1980s to civilian cars in the 1990s, the digital dash (with dash as an abbreviation of dashboard) has become more and more mainstream. Today, drivers can purchase devices to place on their dashboards and project a heads-up display on their windshield—while expensive sports cars sometimes include a digital dash among their higher-end features.

While the original heads-up displays contained the information a military pilot would find useful, such as altitude or radar, the digital dash in cars displays the information of a traditional analog dashboard and additional features, such as GPS.

It is important to note that when the term digital dash first appeared in the 1980s it referred to simply an analog dashboard with a digital display. It wasn’t until the 2000s that heads-up displays in cars began to be referred to as the digital dash, taking on its slang meaning.

Popularity of the term spiked in September, 2015 when recording artists Drake and Future released a record called “Digital Dash.” In the lyrics, the artists boast about their hard work and the luxury items they can buy as a result, including expensive sports cars with a digital dash. A significant portion of online conversation involving the term digital dash is about the song.

whipping some shit with a digital dash and zero miles .. srrrrkt
@GODBODYMITCH, June, 2016
I think every Uber we’ve taken in Berlin has been a benzo. This guy just swooped us and he’s got that digital dash 😩
@JR1tty, March, 2018
As for the interior, it's a little different from the regular Kona, thanks to a floating center console with push-button gear selection and the usual green monitoring systems integrated into the digital dash. It's also pretty grey in there... a bit like the Google Pixel of cars.
Mihnea Radu, Autoevolution, March, 2018
SEE MORE EXAMPLES

Outside the context of technical car manufacturing discussions or industry publications, digital dashes are most commonly used to refer to an expensive car that would come equipped with a built-in heads-up display.

The implication of saying that someone has a digital dash is that they are so wealthy that they can afford the class of luxury vehicle that would have the dash from the manufacturer. Songs that reference a digital dash are mostly variations on this theme, like the Drake and Future song that popularized the term.

A digital dash can also refer to driving at high speeds in a sports car that can go faster than less expensive cars. Again, the implication of someone doing the digital dash is that the person can afford high-speed cars.

This is not meant to be a formal definition of digital dash like most terms we define on Dictionary.com, but is rather an informal word summary that hopefully touches upon the key aspects of the meaning and usage of digital dash that will help our users expand their word mastery.