Everything After Z by Dictionary.com
Previous Word: doujinshi
Next Word: dream gap

Dragon Energy sounds like a shitty caffeine drink I would have paired with Popov vodka when I was 20
@WhitneyCummings, April, 2018
Is dragon energy comparable to Charlie sheen's tiger blood?
@StacieKantar, April, 2018
Still wondering how one obtains "Dragon Energy"?
@briton_bond, May, 2018

Where does dragon energy come from?

It’s possible that the words dragon energy originated in taoism, a philosophical system evolved by Lao-tzu and Chuang-tzu advocating a life of complete simplicity and naturalness and of noninterference with the course of natural events … in order to gain a happy existence in harmony with the Tao.

According to Tin Yat Dragon, a website about Taoism and Taoist magic, dragon energy is a metaphor used in Taoist magic. Dragons, mythical fire-breathing creatures, are commonly seen in Taoism, and their energy is considered by some to be “the essence of creation,” and “power of everything in nature.”

The term dragon energy has since been popularized by rapper Kanye West, who first shared the phrase on Twitter on April 24th, 2018.

He later used the phrase to refer to himself and President Donald Trump.

You don’t have to agree with trump but the mob can’t make me not love him. We are both dragon energy. He is my brother. I love everyone. I don’t agree with everything anyone does. That’s what makes us individuals. And we have the right to independent thought.

Although he was not the first to use the words dragon and energy together, West’s usage helped pushed the phrase into social-media popularity, where it’s used by people in jokes about West and in place of the word energy itself. For example, someone might say they’re really low on dragon energy today. 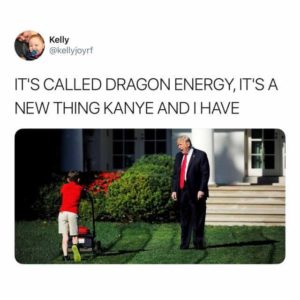