What do funeral potatoes mean?

Funeral potatoes are a type of cheese and potato casserole, often served at large family gatherings in the Midwest and especially in the Mormon Church.

Where does funeral potatoes come from? 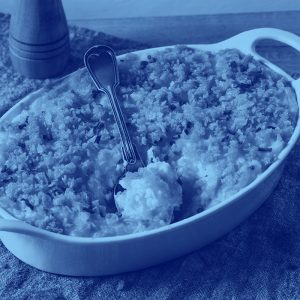 Funeral potatoes are made by baking hash browns or cubed potatoes, cheese, cream sauce or soup, butter, and breadcrumbs together in a dish. While noted as a classic Southern and Midwestern folk dish, they are closely with the culture of the Church of Jesus Christ of Latter-day Saints, or the Mormon Church.

The name comes from the Mormon practice of serving the dish at receptions after funerals, especially those planned by a woman’s group called the Relief Society. The dish may also be served at other, livelier occasions, shall we say, such as holidays and family gatherings.

When the hot dish took the nickname isn’t exactly clear, though we can find folks asking for recipes for funeral potatoes in internet Usenet groups by 1996. The Mormon Church, for its part, was founded in 1830.

Funeral potatoes have become so identified with Mormon culture that, when the 2002 Winter Olympics were held in Salt Lake City in the Mormon-populous sate of Utah, a collection of Mormon Soul Food commemorative pins were issued for the event. One featured a pan of funeral potatoes. 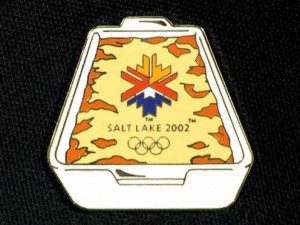 Coca-Cola, apparently, capitalized on the popularity of the funeral potatoes pin and released its own, pairing some of funeral potatoes with a can of Coke and the slogan “So Much Better Together.” What could be more wholesome?

The Mormons don’t have a monopoly on funeral potatoes, though. Elsewhere in the US, particularly the Midwest and South, the same essential dish goes by hash brown casserole, cheesy hash browns, or party potatoes, among other names for this common concoction of cheese and potato. Peas, pork, broccoli and other ingredients may vary the core recipe. Non-Mormons may also bring the bereft some funeral potatoes as a warm gesture of love and support.

For those unfamiliar with the tradition of funeral potatoes, the name can be confusing. In April 2018, Walmart advertised frozen funeral potatoes, sold in a plastic bag for heating. Some customers found the name bewildering if not ghoulish, taking to social media to express their confusion—and meeting with staunch defenders of their beloved dish.

Is it just me, or does anyone else find the name of this potato casserole mix disturbing? The back side says "potatoes to die for" – now that's kinda funny ? ? ? https://t.co/v7ic0ZJRB1

I recently attended a funeral in upstate New York. One of the comfort foods served after the service was a cheesy potato casserole, aka funeral potatoes. I’ve adapted it here with Maine potatoes and smoked cheese
Christine Burns Rudalevige, The Portland Press Herald, February 2018
I had never heard of funeral potatoes before a chilly evening last year, when I sat down to dinner on the patio of Hell’s Backbone Grill. This idyllic farm-restaurant sits at the threshold of the Grand Staircase-Escalante National Monument, in the tiny town of Boulder, Utah.
Joshua David Stein, The Wall Street Journal, November 2017

Funeral potatoes may not make sense to everyone, but they make a lot of sense to Mormons and Midwesterners, who are as proud of their dish as they are aware that it confuses everyone else.

Being Midwestern is ensuring you've got the best funeral potato recipe and being disgusted that they are selling insta-mix funeral potatoes now. How TF you keep the top crunchy?

Despite the name, funeral potatoes can be served and eaten anytime, not just at a funeral. (But does death make them extra tasty?!) And despite their popularity in the general public (it’s cheese, potatoes, and breadcrumbs after all, y’all), funeral potatoes are still considered a Mormon specialty.

I always thought funeral potatoes were just a mormon thing. I didn't know they're clogging Midwestern arteries as well. Augason Farms is a Utah company. They specializes in freeze dried food to survive the apocalypse.

This is not meant to be a formal definition of funeral potatoes like most terms we define on Dictionary.com, but is rather an informal word summary that hopefully touches upon the key aspects of the meaning and usage of funeral potatoes that will help our users expand their word mastery.