What does Klondike bar mean?

A Klondike bar is a brand of ice-cream bar traditionally made with vanilla ice cream surrounded with a hard layer of milk chocolate. It’s most commonly brought up in reference to the product’s slogan: “What would you do for a Klondike bar?”

Where does Klondike bar come from? 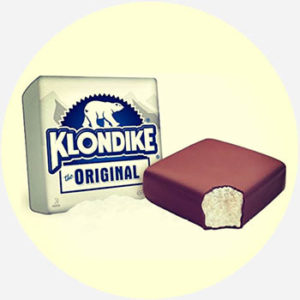 The Klondike bar was first introduced in five ice-cream flavors in 1922. It takes its name from the Klondike River in Yukon, Canada, site of a major gold rush in the 1890s. Klondike suggests “cold” and bar may allude to gold, presenting the Klondike bar as a ice-cold treasure.

Though it was originally sold only in Pennsylvania and Ohio, by the late 1970s, distribution expanded along the East Coast before becoming widely available. The product is known for its silver packaging and polar bear icon.

In 1982, the Klondike bar became a household name when the company launched its popular advertising campaign: “What would you do for a Klondike bar?” Early versions of the campaign asked people on the street what they would do in exchange for the frozen treat, such as doing something silly like act like a chicken or act out the children’s song “I’m a Little Teapot.” A disembodied arm then held up a half-unwrapped ice cream bar in front of the camera to illustrate the temptation.

Later commercials featured celebrities and even more extreme situations, such as Brazilian waxing. The popularity of home videos and social media both made submission contests popular (e.g., “Tell us what you would do for a Klondike bar, and you could end up in our next commercials”).

Throughout the years, even as ownership of Klondike bars has changed hands, the popular marketing campaign proves its staying power. Commercials featuring the slogan are still being produced in the 21st century, and the marketing phrase is so recognizable that it has been parodied on Family Guy and in other media.

To the women that have done "sketchy" shit for a Klondike bar..[...].. you know you could get a box of 6, for like $3.99.. right?
@MorphineDreamzz, April, 2017
To kick off it's 32nd season, Terrific New Theatre has a property you are gonna love. The Tribute Artist by Charles Busch is a four-story comedy townhouse in New York. Forget about that Klondike bar, what would you do for a prime piece of Manhattan real estate?
David Edward Perry, Broadway World Birmingham, September, 2017
I love Rick Nash. There are a lot of things that I would do to get Nash on this team, some things that I wouldn’t even do for a Klondike bar, and I really enjoy those. Could you imagine him on David Krejci’s wing on the second line, and killing penalties with Riley Nash?
Chad Zimmermann, FanSided, February, 2018
SEE MORE EXAMPLES

Officially, the Klondike bar is a registered trademark, Klondike® bar, and this is how the term is used in formal commercial contexts. Today, when the treat is not in the news for new flavors, Klondike bars are almost exclusively invoked as a reference to the slogan  In popular culture, Klondike bars are sometimes used as a kind of humorous unit of exchange for goofy dares or childish bargaining. For example, the statement “I would kill for a milkshake” could be followed up with, “Don’t be crazy, it’s not a Klondike bar.”

In that vein, Klondike bar jokes are possibly more widespread on the internet than discussion of the ice cream itself. Alternate slogans like “WWJD for a Klondike bar,” “I’m ashamed of what I did for a Klondike bar,” and “I heard what you did for a Klondike bar. Call me.” appear on t-shirts, mugs, stickers, and other novelty merchandise. The implications of many of these alternate takes on the slogan are that people will even trade sexual favors for the ice-cream bar because they love it so much.

Love for the frozen treat isn’t universal—on the opposite end of the spectrum, another common joke is to point out how little someone would do for a Klondike bar or something they would do more for instead.

Klondike bars are often the subject of brand contests, again in reference to the famous slogan. Other brands will sometimes partner with the ice-cream company to ask consumers to submit what they would do for a Klondike bar. When these contests are held on social media, they are usually accompanied by hashtags and won by amassing the most likes or shares.

This is not meant to be a formal definition of Klondike bar like most terms we define on Dictionary.com, but is rather an informal word summary that hopefully touches upon the key aspects of the meaning and usage of Klondike bar that will help our users expand their word mastery.